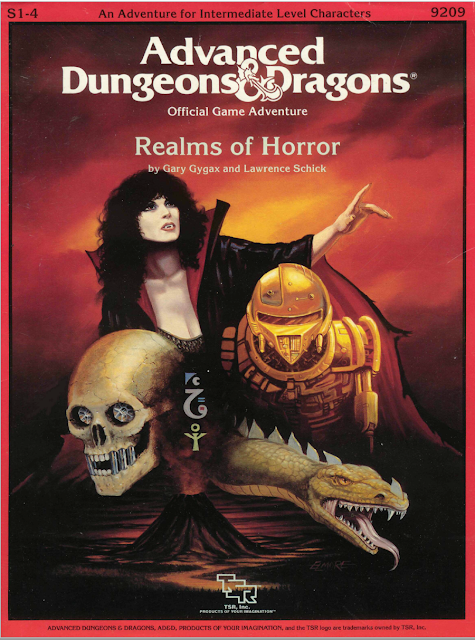 I never realized that TSR re-released S1-4 as Realms of Horror back in the day. Now it pops up on the DTRPG page. Go figure. 10 bucks for the 4 modules isn't bad at all, but can anyone tell me how the "new editing" treated the adventures?


Tomb of Horrors, White Plume Mountain, Expedition to the Barrier Peaks, and The Lost Caverns of Tsojcanth. . . four modules that are already classics in the AD&D® game system.

In this module you will find those four adventures in a newly-revised format, re-edited for ease of use in a gung-ho, let's-do-it-all-at-once campaign for your intermediate level characters. This product contains an 80-page adventure booklet, a 48-page illustration booklet, and a 16 page map and inscription booklet.

If you've played these in the past, and want to do so again, you'll have the pleasure of re-living the first-time thrills. If you're new to the AD&D game, and want an all-in-one campaign, this is the one.

Open the book, open your minds, and let the adventures  begin!