You've Been Banned! - Pexx's Experience with the OSR Discord Server

Hello, my name is Pexx as I wear many hats, but I mainly hang my hats in Tenkar's Tavern Discord and run a lot of the behind the scenes activities that go on there. My tag on the server is the Tavern Custodian because I fix things that break and take care of the little things that need working on.

So I recently I got banned from the OSR Discord server, that some of you are a part of. Let me give you some history before I got banned with direct interaction with one of their moderator James Young.

Once upon a time I tried to get Tenkar’s Tavern Blog submitted to their pinned blog roll list that we also have pinned here in Tenkar’s Tavern back when the Google+ Shut down was announced and people were flooding into Tenkar’s Tavern Discord and the OSR Discord. I followed the instructions, but it kept getting removed. I messaged the server owner Chris McDowall to clear up the confusion.
The Blog List: https://docs.google.com/spreadsheets/d/10qvE1s62UA55pleTW54RAZZw-oJQV8yYGZb_UtYo9TE/edit#gid=0

Here’s what he had to say…

Next up is my first interaction with James Young: 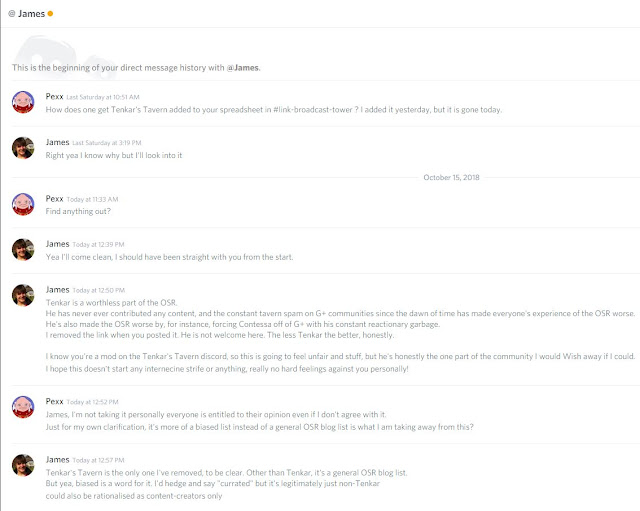 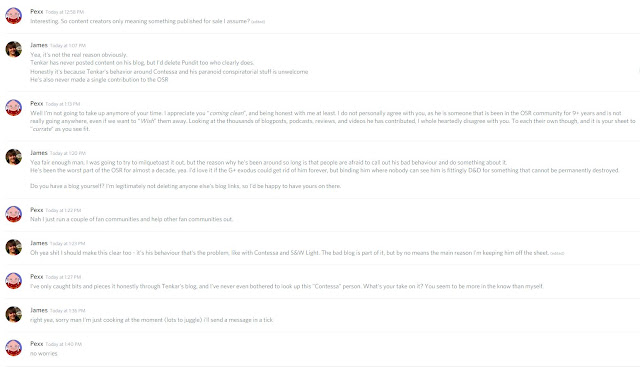 So not only did he lie to me my very first time talking to him, but he let his biased opinion dribble onto me to me from the get go. I honestly didn’t care, sure you can dislike someone, but why lie about it?

So that was back in October 2018. Jumping forward I didn’t really have any more interaction with him until recently when I noticed one of my servers was missing. For those of you that don’t, know when you kick or ban someone you can provide a message to the individual when you perform the action. Parting words if you will or a reason as to why you got banned or kick. There was none of that. Didn’t think much of it, I simply rejoined the OSR server.

Happened again the next day. Ok someone is screwing with me so like a good little soldier I re-joined yet again, but I wanted some answers so I messaged 2 moderators ( Xsi & Cavegirl) followed by the server owner Chris McDowall.

Xsi had this to say…. 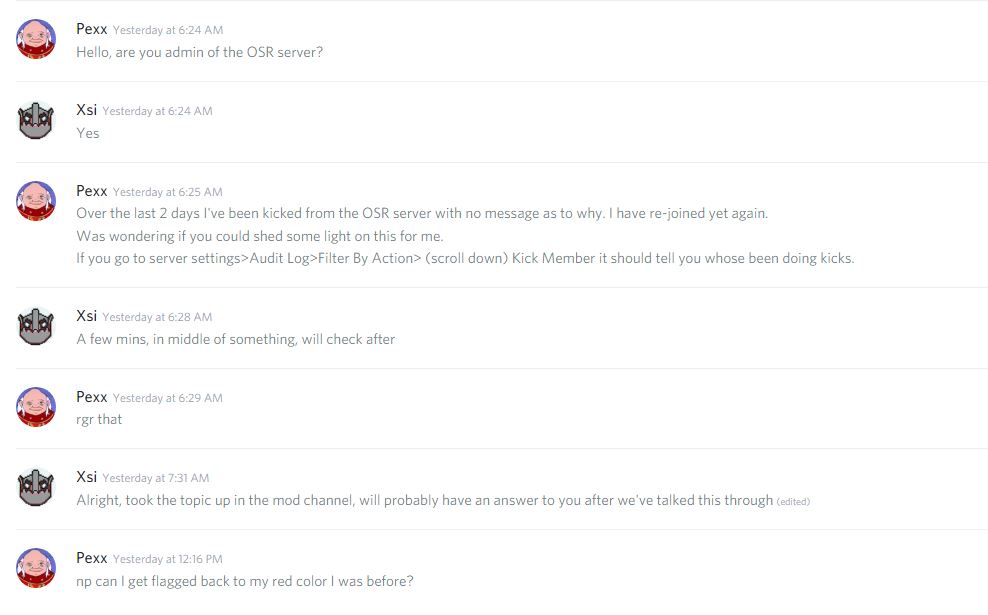 I did not receive an answer back from Xsi before James Young messaged me that he was banning me.

Cavegirl had this to say.... 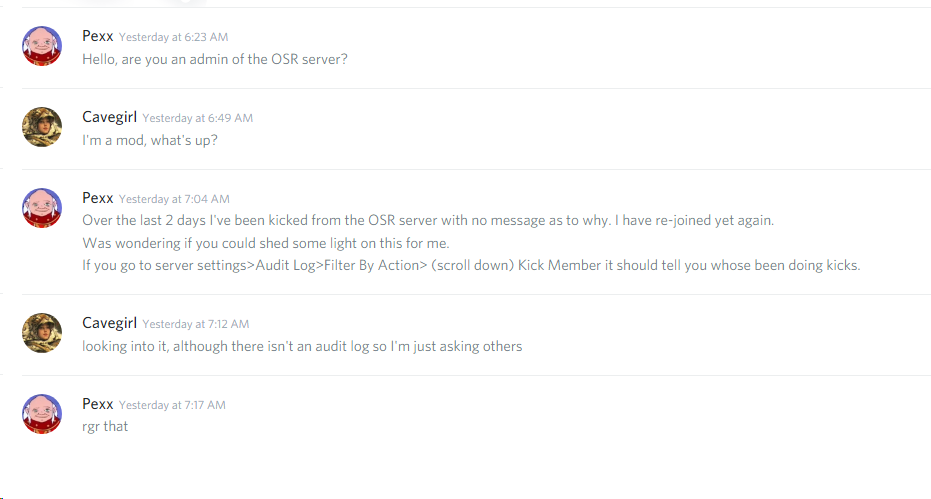 Another lie, there is an audit log! I’ll give Cavegirl the benefit of the doubt here, Chris may have restricted that part of the server to his mod team for whatever reason. The audit log does exist on every single Discord server, and you can view any changes (including bans and kicks) and it tells you who has done the action.

Next up Chris McDowall the server owner was messaged.

Several hrs later I get a message from Mr. James Young stating the following…

So because it was funny and he thinks I am worthless not only his community, but all others.
Thanks James! You sir, are a class act.

I forwarded James message onto Chris McDowall our server owner just before James Young got the ban off severing my contact with anyone on the OSR server unless they were on my friends list (I sent friend request to Xsi, Cavegirl, and Chris in hopes of resolving this). Mr. McDowall has been informed about James Young actions. I dunno if he will unban me and let me back into his Discord or not. It’s his server, and he can do with it what he wants to.

So what did I post over there you may be wondering? Pretty much in the link section when people from our Tenkar’s Tavern server had a kickstarter, product launch, podcast come out (including my own) I would drop a link in their OSR link section. That was pretty much it. Just sad I won’t be able to do so any longer. It’s hard enough to try and advertise on your own all I was doing was attempting to spread the word about good content for the OSR.

I have no regrets standing beside Tenkar, and I do so proudly. If that comes with me not being able to associate with certain circles within our small niche of the gaming the industry so be it. We are doing great things in The Tavern and we have even more great things in the works for everyone.

**How do I get to The Tavern Discord? Follow these Steps:**
**Step 1.)** Go here https://discordapp.com/download
**Step 2.)** Click which is best for you Windows, Mac, Android, IOS, or Linux and download it.
**Step 3.)** Once it has finished downloading click the + button surrounded by a dotted circle on the left hand side
**Step 4.)** Click the Join a Server button and copy and paste this into it https://discord.gg/GaXW2TX