When an RPG Kickstarter Gets Suspended for IP Violation by WotC, Has the Sleeping Bear Been Awakened?

I've been very happy with the various projects Fail Squad Games has produced via Kickstarter. Lloyd is an amazing artist and a strong adventure writer. I was surprised to find his latest project, The Ruins of Mistmere - a 5e adventure, was canceled for IP violation. At least, I was surprised until I followed the conversation on Facebook.

Before we get to that, here's the notice on Kickstarter: 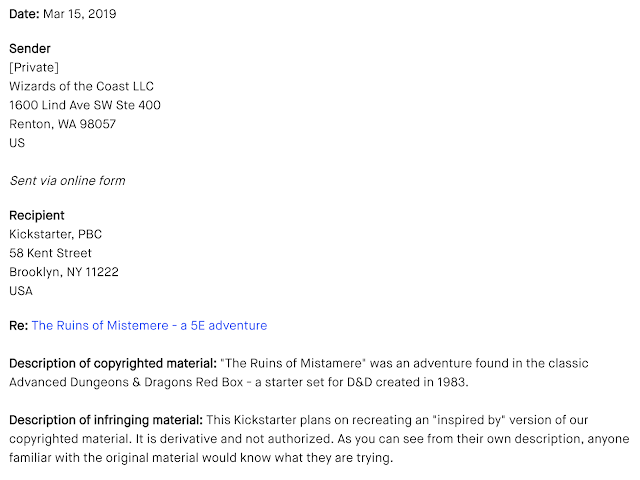 Obviously, the paralegal got the source of the IP partially wrong, especially considering the Ruins of Mistmere isn't even an adventure in the 1983 Red Box but rather more of a hypothetical adventure referred to in the text. Still, it was, and still is, WotC IP.

If you read the admittedly rather long conversation that resulted from Lloyd's Facebook posting, you see the project was created and submitted with the "potential of poking the bear."


Lloyd Metcalf I think I did in saying that it was inspired by the "Your first adventure" in the video and ads. I also accidentally had the phrase Dungeons & Dragons in the text of one of my ads... or something. (how one does this "accidentally" is beyond plausibility)I was in a rush to pack for Gary Con and already tired at launch. lol.

James Lowder This Kickstarter is very clearly using that as the springboard. It's not the rules that got you in trouble, but using their copyrighted content--characters, plot, etc. "This adventure is inspired by, and is a revisit of, the first 'Group Adventure' in a certain Red Box set of the world’s favorite basic roleplaying game." and "Borgle is well known in many original adventures and legends; many report that his name was spelled with an “a” in place of the “o”." The last is screaming "we just changed an A to an O but it is the copyrighted content."

Lloyd Metcalf Yeah - i know.... Again, I knew I was stepping up to the line in trying to bring the flavor of this adventure to 5E. I COMPLETELY knew I was rolling some dice on the idea.

James Lowder ... the mention of D&D probably got the project onto an automatic notification list. "Other people got away with similar" as a defense will just mean WotC (rightly) expands its notifications list, so that, say, RPG + "red box" are alerts. This project is clearly intended as a copyright violation. It announces itself as such. It is not a shock it got stopped. That's a much bigger issue than mentioning D&D.

James Lowder voices my fear. Now that the bear has been awakened, it may decide to defend its territory. WotC has mostly played nice with the OSR and publishers of material for the current edition of D&D, even those projects and publications that may have entered and perhaps gone beyond any kind of grey area in the use of WotC IP and trademarks. This may have more of a longterm effect than Lloyd or anyone else may have initially expected.