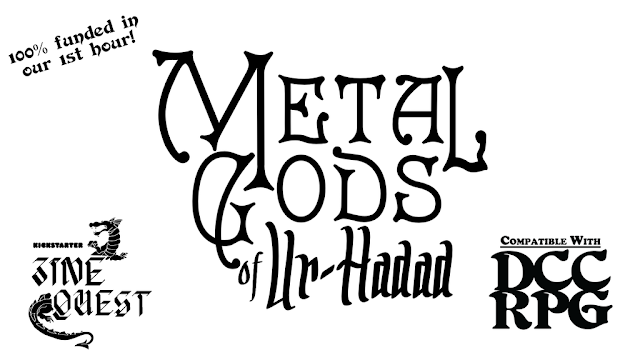 "Four years in the making, the original Metal Gods team returns for three more issues of metal-fueled mayhem for the DCC RPG."

I had no idea it had been four years since the last issue of the Metal Gods of Ur-Hadad Zine. I'm going to need to dig through my gaming shelves and pull them out.

Metal Gods read like some sort of vaguely acid-induced trip through some alternate DCC  RPG setting. It was, and is, awesome. Sigh, more money leaving my wallet.


Issue #4: Time of Crisis!
Like any other multiversal hyper-megalopolis, Ur-Hadad is no stranger to calamity. In fact, crisis is one of the First City's defining features! This issue provides a whole slew of tools for Judges to use to spin up their campaigns from small adventures into city-wide, culture-shaking phenomena! Including profiles of Ur-Hadad's most notorious crises and their causes (along with special rules introduced by each) and a Crisis Generator, this issue is all about turning your game up to 11!
This issue is almost completely written and will be ready for art & layout soon.

Issue #5: Murder Gangs of Ur-Hadad
First, we gave you Street Kids of Ur-Hadad. Then we gave you The Heist! Metal Gods has always focused on urban adventures and now we're taking them one step beyond! In Murder Gangs of Ur-Hadad, we'll present a system for running a thieves guild, assassins coven, coterie of smugglers or however your criminal taste run. This unique system builds on some trends already out there in the greater DCC-o-sphere, bringing them together in a tight, cohesive package. You'll also get to know the seedy underbelly of the First City, including profiles on some of her most notorious gangs.
This issue is currently in playtesting and is expected to be finished by mid-Summer and Doug Kovacs has signed on to do the cover!

Issue #6: Mysterious Gods of Ur-Hadad
From the Avenue of One Thousand Gods to the Gloaming Deeps beneath the city's docks, cults and mystery faiths permeate Hadadi society. In this issue, we'll explore some of the First City's stranger religions and sects, from the austere followers of the God of Blackened Skies to the debaucherous Last Adherents of the Sensate, we'll profile these bizarre faiths and how to use them in your game. We'll also include rules to integrate cults into your Murder Gangs of Ur-Hadad game, whether as foes or as your PCs' crew!

Neither The Tavern nor myself receive compensation for Kickstarter coverage or Kickstarter posts. Some Kickstarters are brought to the attention of The Tavern by their creators. Such communication does not guarantee coverage here at The Tavern. I do not back every Kickstarter I highlight as my wallet's contents are not limitless but I do find all highlighted Kickstarters interesting for one or more reasons - Erik Tenkar
Posted by Tenkar at 10:09 AM