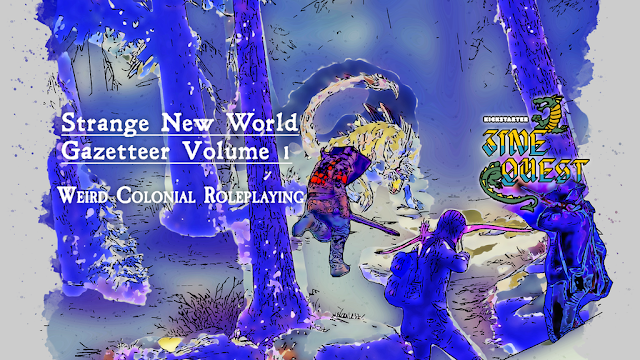 I'm a sucker for settings. I really like the Colonial Gothic setting even if I don't much like the attached rule system. So color me excited when I stumbled across a zine that is both OSR AND about a New World Colonial Era setting. Strange New World Gazetteer: Weird Colonial Roleplaying Zine Kickstarter looks to be my cup of tea.

An RPG and OSR setting zine for adventuring in a strange fantasy version of colonial America. Fearsome creatures, witchcraft and weird.

The above is the elevator pitch and it calls to me. I'm sorry, but I was a history major, and American history, up to the Civil War, is one of the areas I concentrated in. Of course, that was 30 years ago, so don't expect much fact checking from me ;)


Strange New World is an OSR-compatible campaign setting set during the colonization era of North America (1600/1700's era) but set in a world where magic, monsters and, more importantly, strangeness have returned to the new world. Soldiers and monster hunters fight side by side trailblazers and mountaineers. Witches weave terrible magics while preachers vanquish chaos and shepherd the people.

(Strange New World content is compatible with any WhiteBox / B/X / BECMI or AD&D system, we use a hacked version of Lamentations of the Flame Princess as our OSR base. SNW content could even be used with OSR-adjacent games such as Dungeon World.)

Compared to a traditional fantasy world, the Strange New World is a points-of-light setting. Colonization of the new world has slowed and exploration in many regions has ceased after proving too risky. There are fewer settlements than there were in actual history and they are spread very thinly through the perilous frontier. The land rages against colonization, it cracks and leaks hellfire pockets of poison gas, it births powerful megafauna guardians, and summons woeful bogeys from the fey realms in efforts to protect itself. Society has instead packed itself into well-protected cities, increasing urban population above historical levels, while spending more resources on military outposts and organizations opposed to the chaos of the new world.

This is also a world where gonzo weirdness has found a home in history. Ancient alien visitation shaped the beliefs of the native people, once-mighty and now-lost civilizations that existed thousands of years ago in the new world are there to be discovered or pillaged. This is a world where fables and folk lore are not merely cautionary tales but historical accounts. A world where the mythical Underworld is a real land of the dead that can be visited. Strange New World also exists in the meta-setting of 400 Billion Suns, where "billions and billions" of possible worlds could have interacted with each other through the magical eons.

Monsters, magic and bedlam must be dealt with before man may progress in this Strange New World.

Even if I never use the setting, I'm going to enjoy the hell out of it :)


The Strange New World setting will be supported through a dedicated website that will function as an information hub and lore encyclopedia.

The Gazetteer will be presented as an in-universe gazette written and presented by characters from within the Strange New World itself. Such characters include Willam van Dook, renowned world explorer; Jeremiah Shagbark, famous bogey hunter with the Fang and Fur Company; Wolf-that-Sings, a Hopi warden with ties to the western world; and more!

I'm in for the signed, alternated cover plus PDF for 12 bucks shipped within the US. Huzzah!

Neither The Tavern nor myself receive compensation for Kickstarter coverage or Kickstarter posts. Some Kickstarters are brought to the attention of The Tavern by their creators. Such communication does not guarantee coverage here at The Tavern. I do not back every Kickstarter I highlight as my wallet's contents are not limitless but I do find all highlighted Kickstarters interesting for one or more reasons - Erik Tenkar
Posted by Tenkar at 9:14 PM