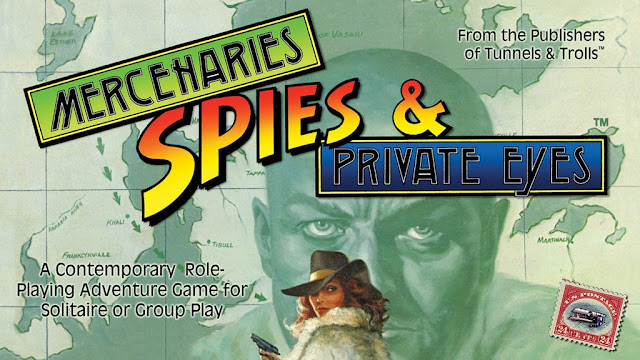 Mercenaries Spies & Private Eyes is an RPG I've owned for years and I've always wanted to find a group to play it but being out of print finding others that owned it has been damn near impossible. Now that Flying Buffalo is putting it back in print I may be able to find that elusive MSPE gaming group ;)


Mercenaries, Spies & Private Eyes RPG was first published in 1983 by Flying Buffalo Inc. MSPE (as it came to be known) allowed players to run rpg adventures from the 1800's all the way to the modern era, ranging from Victorian steampunk, and crime noir, to super spy thrilllers in the cold war. Michael Stackpole wrote the MSPE role playing game, using the Tunnels & Trolls framework as a jumping off point.

In 1986, Flying Buffalo took a hit from an unrelated disaster, and sold the rights of MSPE to Sleuth Publications. They came out with an edition that had a black & white cover, and they left out a few things that Buffalo had included, and inserted a few new things that weren't in the Buffalo edition. The last existing copies of the Sleuth edition have sold out, so now Flying Buffalo is printing a third (Combined Edition of MSPE) which includes all the material that was in both editions!

The Combined Edition: What's in it? The new edition will contain all the original text and art from the Flying Buffalo and Sleuth editions.  From the Buffalo edition, we will use the amazing painted cover and will include the Tunnels & Thompsons section (which was not in the Sleuth edition) along with some missing art. We have also made various corrections to the rules text that have been found by players and fans over the years.

Shit, looks like even I need the new edition.

18 bucks for the print plus PDF (free shipping in the US), 25 if you want a signed edition. Decisions decisions...

But it damn it! I want to play some MSPE!