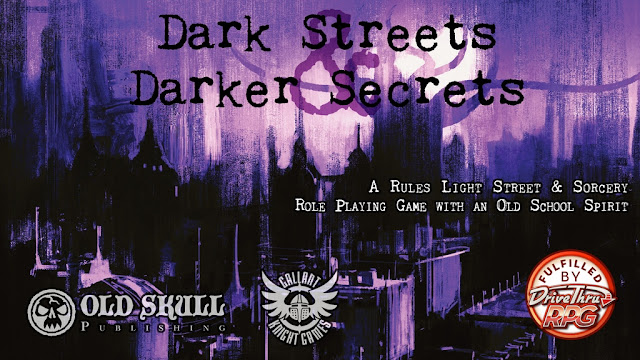 Let's take a peek, shall we?


Dark Streets & Darker Secrets a game about modern adventures in the world we live today, only with a layer of supernatural weirdness and horror. Characters are people who have found out about the mysteries and horrors that exist in the world and have decided to do something about it, be it battle it, join it, or simply explore its possibilities in any way they see fit. They will battle evil cultists, corrupted ghosts, bloodsucking vampires, and frenzied werewolves, or maybe they will be the horrors of others. The game was inspired by TV shows such as Buffy the Vampire Slayer, Supernatural, Grimm, Chilling Adventures of Sabrina, X-Files and others.

This edition of the game assumes the reader knows the principles of what role-playing games are and how they are played. This is a complete game, containing everything you need to play sword and sorcery adventures in the streets of a corrupted city of a fantastical and horrific version of our own world.

Consider me very intrigued. Most modern-day horror games have the "reality weakness" in my opinion, as we hold them up against the real world, or at least I do. Holding the game world up against TV fiction will make that an easier transition.

As for the mechanics:


Powered by the same simple and flexible system as Solar Blades & Cosmic Spells, Dark Streets & Darker Secrets core rules revolve around rolling a d20 die and getting a result equal or below the character stat, but above the Difficulty set by the Referee. There are other nuances that may apply depending on the situation, but that's the main type of die roll that is made in the game.

Characters in the game have a defined character Archetype like The Tough, The Nimble, The Smart or The Gifted, which determine the main role of said characters and their most special abilities. However, the game also allows players to define a character Concept, which is completely free form and allow each character to be customized anyone players want. The Tough could be a "Honest Ex-Cop", "Vindictive Biker" or "Zealous Vigilante" for example. The character Concept affects rolls, giving characters better chances at accomplishing deeds related to them, but hindering them when some activity would be harder for them to execute because of it.

Game play is very fast and focused on freedom and flexibility. Referees will find dozens of tools to help them create scenarios, locations, NPCs, monsters and complete adventures.

If you are curious and would like to take a deeper look into the game, you can find the complete text of the game right here: https://oldskulling.blogspot.com/2018/12/dark-streets-darker-secrets-complete.html

Woah - that includes a link to read the complete text of the game for free. Wy kind of gaming Kickstarter - already written and available for a free peek.

Neither The Tavern nor myself receive compensation for Kickstarter coverage or Kickstarter posts. Some Kickstarters are brought to the attention of The Tavern by their creators. Such communication does not guarantee coverage here at The Tavern. I do not back every Kickstarter I highlight as my wallet's contents are not limitless but I do find all highlighted Kickstarters interesting for one or more reasons - Erik Tenkar
Posted by Tenkar at 6:42 PM