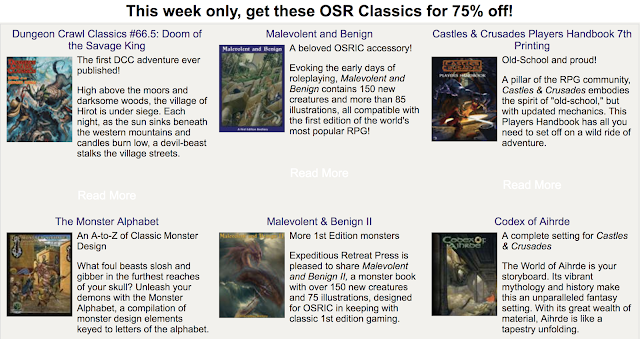 RPGNow is running a sale with 15% off (or more) on many OSR titles in PDF and the six pictured above are virtual "must haves" at 75% off.

Let's peek at the six titles above, shall we?

At long last, the first adventure ever published for DCC RPG is now available! This is the updated second printing that was first released at Gary Con 2014. It features a fresh edit and several new pieces of art! 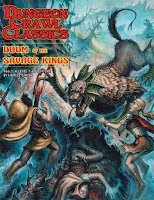 High above the windswept moors and darksome woods, the village of Hirot is under siege. Each night, as the sun sinks beneath the western mountains and the candles burn low, a devil-beast stalks the village streets, unleashing its savage fury on the living. From warlord to pauper, crone to child, no one is safe.

Defeating the immortal hound will require more than mere blades or even spells. To slay the beast, the characters must delve into the mysteries of the land and its Savage Kings. Only then, armed with relics forged from a bloody past, can the most cunning and courageous of adventurers challenge the hound of Hirot!

What foul beasts slosh and gibber in the furthest reaches of your skull? Unleash your demons with the Monster Alphabet, a compilation of monster design elements keyed to letters of the alphabet. 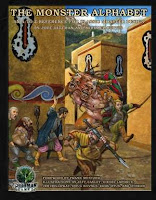 A is for Android, B is for Breath Weapon, C is for Crossbreed! Game masters of any rule system will find inspiration for creating strange, new abominations: random tables of traits, powers, and lore; awe-inspiring illustrations by your favorite fantasy artists old and new; and rolling handfuls of dice directly on monster generation diagrams.
The entries are accompanied by fantastic art from classic fantasy illustrators and are compatible with all fantasy role playing games.

Rules Set: Systems-neutral, designed to be used with any RPG

Evoking the early days of roleplaying, Expeditious Retreat Press is pleased to release Malevolent and Benign, a new 1e monster book with 150 new creaures and more than 85 illustrations in this 128-paged tome, compatible with the first edition of the world's most popular roleplaying game! 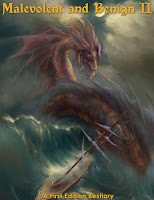 Evoking the early days of roleplaying, Expeditious Retreat Press is pleased to release Malevolent and Benign II, a new 1e monster book with 150+ new creatures and more than 75 illustrations in this 110-paged tome, compatible with the first edition of the world's most popular roleplaying game! 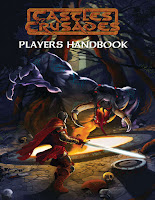 It’s easy to learn attribute-based rules system allows players to choose among 13 archetypal character classes and 7 races to create their characters. Spells, equipment, fast-paced combat rules, and all essential information needed to play a game of Castles & Crusades is in this book. 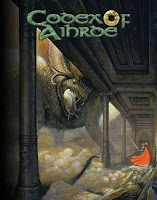 The World of Aihrde, (Codex of Aihrde/map) is your storyboard. Its vibrant mythology, and an unfolding history, makes the World of Aihrde an unparalleled fantasy setting. With a wealth of playable material, Aihrde is like a tapestry unfolding, one that you can make your own!

Rich in adventure hooks, Aihrde is like no other on the market today. It infuses character generation with an energy unique for its genre, and arms the game master with material that is both fixed and malleable.

The world of Aihrde spins upon an earth-like axis of ancient civilizations where good and evil have struggled for countless years. It is a world that bears the markings of its past; where ancient evils slumber, stained with the power of eldritch wizardry; where gods dwell in bejeweled halls of wonderment, worshiped by men and women of all creeds; where dragons live in great dens of heaped treasure; where the new stands upon the ruins of the old in beds of ancient glory.

The Codex of Aihrde includes everything you need to get started adventuring in one of the most expansive game settings you'll ever enjoy.

The Codex is presented in two parts:

Part 1 The Andanuth (roughly 102 pages): Here we learn the story of Aihrde, from its uttermost beginning to the present age. It follows the journey of All Father, the creation of the gods and the world. We learn who the gods are and how they interact long before the coming of the dwarves and man. The story covers the creation of these people and more and all their long journeys and travails from their arrival to the realms of the day. The Andanuth is generously sprinkled with stories and tales of gods and men, dwarves and goblins, war and peace. You'll not wonder what happened before...you'll know.

Part 2 The Almanac (roughly 170 pages): In part 2 we dive into the particulars of the gods, the people, countries, places and realms of Aihrde. There are over 50 gods outlined for play, a dozen peoples including all your favorites (dwarves, elves, men, halflings, gnomes, orcs, goblins, giants, trolls, dragons and more). Each of 30 plus realms are intimately detailed with history, government, economy, military, present rulers and other specific information. Beyond that we have terrain that is detailed as well.

There are a bunch of affiliate links above. Affiliate links keep the beer cold and the lights on here at The Tavern. I thank you in advance for your support.