Let's look at Gareth's "recent" Far West timeline of notable events, shall we, and the "D6 Era" promises...

5/24/18 - "For those of you who have contacted me about getting a look at the new rules doc, I expect to be sending that along next week." (3 months later)

6/4/18 - First cold of the summer. "As those of you who follow on Twitter know, I got my ass kicked last week by a summer cold (as far as I'm concerned, there should be a law against catching colds in the summer -- nothing more miserable)."

6/18/18 - Trifecta - "Held this one off until Monday — last week was a week of family obligations that kept me pretty busy.  My birthday was mid-week, Father’s Day was yesterday, and, unfortunately, earlier in the week we had to put our old lady cat to sleep."

6/29/18 - Now its the heat - "Heat indices of 115+ are no kinda fun, especially when you live in a house with no central air -- curse these 19th-century neighborhoods!  Ah, well -- I'll just take it as "sensory research" for writing about the Thousand Mesas region! Work continues, getting back onto schedule.  I am still expecting to be sending a finished manuscript to layout (and to you) in July."

7/27/18 - Not going to be done when promised. Damn it, Gareth missed Gen Con because of US! "I'm working through this weekend, but it doesn't look like I'm going to hit my self-imposed deadline of July.  (I know, I know -- I've already beat myself up over this.)  It is what it is, and July has been challenging. Regardless:  I'm fairly sure that I only need a week to get things squared away -- but, to be on the safe side, I'm going to give myself two. The coming week, of course, is GenCon.  I will not be going.  For those of you who are, I hope you have a great time!"

Just a quick note, visible to backers only.

As you might know, if you've checked Twitter, I've been offline for the past week, getting the manuscript together, finalizing edits and sending them as we sign off on them over to Eric for layout.

Anyway -- here are the first sections that have already gone into layout.  I'll be sending more out to you (and to Eric) over this weekend, and the rest of them will follow in the coming week.  Everything will be on Eric's desk by a week from today, because starting September 1st, I start working weekends, running my friend Ruth Thompson's art shop at the KC Renaissance Festival, and, honestly, I have no desire to be working 7-day weeks!  :)

So here's the first of them --

If I set this up correctly (my brain is a bit fried at the moment, so that's not a given), the link is logged and will require you to enter a password -- which is PASSWORD REMOVED.   Be sure to email me at gms@adamantentertainment.com if you have any trouble.

This is the front matter, the foreword, the introduction (which gives the overview of the D6PLUS system), and character creation.   As I said above, more is coming this weekend, as we sign off on them, with the rest coming within the week.

So, what do we get today? 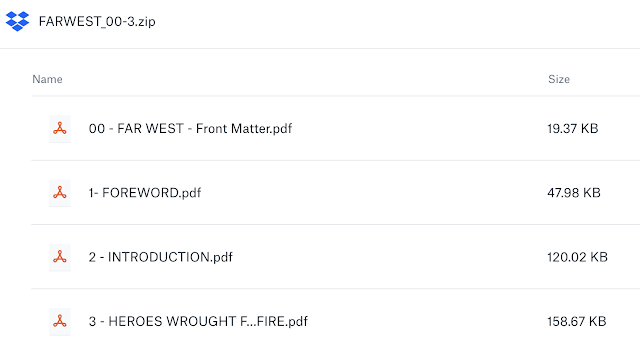 If you are a backer, you will need to download the zip file folder. Trying to download individual files leave it hanging with nothing happening.

I need to give chapter 3 a solid read through, but I do appreciate this nugget from the foreward:


What followed the successful Kickstarter was the 7 hardest years of my life. I won't bore you with the story. Suffice to say that after interminable (and some might say infamous) delays, what you now hold in your hands is the culmination of a very long road. A road that I'm proud to have traveled.

I will be very surprised if we see a complete (and artless) version of the Far West rules before the end of September. Also, one should note there has been no recent discussion of the print release. Still, it is progress on a project that I, for one, no longer have an interest in playing the completed product.
Posted by Tenkar at 8:34 PM