The Eagle Has Landed! I have returned from NTRPG Con... Time for Some Wrap-Up 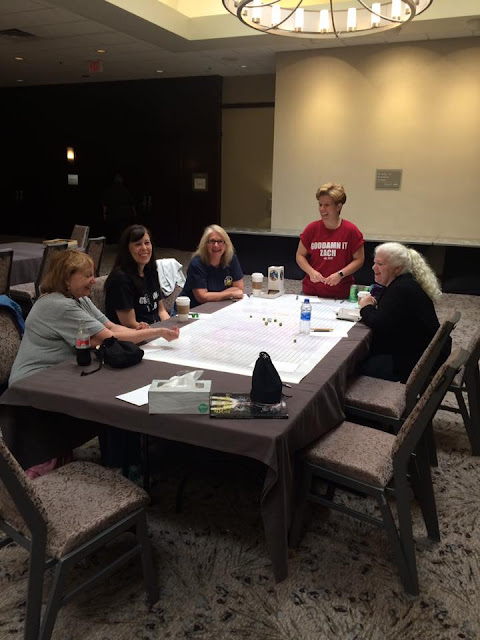 I need a new T-Shirt: "I went to NTRPG Con, Played in Zero Games and STILL Had an Amazing Time!"

Seriously, I was supposed to run three games and play in one but I was the Frog God Booth Biatch (or Both Babe - depends on who's asking) and it simply wasn't possible. I have no regrets either because working the Frog God Booth is simply amazingly fun.

Huge thanks to James Spahn for filling my GM shoes better than I could have ever done. TPK the first session of The Mouth of Doom, and it was so good Rach went back for a second (and third) death. One player's character survived the last two sessions from what I understand and he leveled up (yes, we were using Swords & Wizardry Light).

I even channeled my inner Bill Webb. I gave a school teacher every last copy of Swords & Wizardry Light we had at the booth on Sunday as we were packing up. The first printing might be all gone at this point. I also gave her a copy of Swords & Wizardry Complete. I would have given her dice but damn it, we didn't have any. Reminds me, we need to put together a page here at The Tavern linking some free SWL compatible adventures for new gamers to print out and run with (this teacher is a gaming neophyte but knows.

I'll be shipping the OSR patches back to Thad this week, so if you are looking for one (or more) ping Thad ;)

Rach played in four games this North Texas, and I wasn't playing in any of them. That Rach on the right in the pic above, playing with other wives of Frogs / Frog extended family.

Yes, I had a blast, but more importantly, Rach did too :)