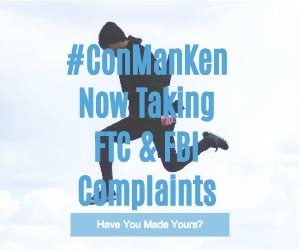 The following is from Marcus King, posted on Facebook earlier this afternoon. I am sharing it with some commenting by your favorite bartender:

Ken has been my friend for about 20 years.

In 2006, as I have described elsewhere in detail, Ken Whitman spent about 3 hours preventing me from committing suicide. Consider, if you can, what you might do to repay such a debt.

Ken and I never worked on any kickstarters. I never backed any of his kickstarters, either. In fact, I have backed about 5 or 6 kickstarters, ever. Two from Reaper, one of two from Dwarven Forge, a couple others. Maybe.

I never received money from Ken about or over or from his Kickstarters. (Please DO NOT consider my assets as a liability to Ken's current lawsuit)

About a year and a half ago I absorbed the assets (and not the liabilities) (Good deal if you can work that out) of another store, the owner, whose name does not need to get muck/dragged - we will call him JIM. He owned Little Monster in Somerset, KY. About that time, Ken Whitman came to work for me as an employee because he needed to work to eat, plain and simple. (Ken could have gotten three squares and a cot another way...) I hired him to work in my store. He did some good work for me for a few months. But, some of my staff did not like working with Ken. (Wow! Is Marcus saying that Ken does NOT work well with others? What a surprise...)

After a few months of Ken working with me, he had proven capable when on his meds, and erratic when not (Oh My! This says so much. Perhaps we are setting up a possible defense for the lawsuit). I suggested to Ken that I pay him $8 an hour (what most of my 12+ staff get paid) for 20 hours a week to do projects for me (like casting terrain, and making comic lots, etc), and also pay him 20 hours a week to work on old kickstarter projects (and thus allowing him to work for me, but not with my other staff) (if Ken was really such a liability, why hire him at all?). I was willing for him to start using my computers or equipment, paying him $8 an hour for 40 hours, and he could live in my home if need be (in most states, after 30 days you cant evict him, either). Thus, using his pay to buy whatever other supplies he needed (like pencils or what have you). Ken went off to work for Troll and Toad instead. (uhr?)

My plan for the Little Monster location was to close it, but my new partner (JIM), wanted to keep it open, so we tried. But, MOST of what I acquired by merging with Little Monster was their inventory, and their customer base, and their manager (Jason, still works for me, does a great job). I did not want to keep the store open. So, we tried making it a pallet store, didn’t work. I tried to gift it to my daughter and her boyfriend, and give them a good start. REALLY didn’t work.

Finally, Ken not wanting to work for Troll and Toad any longer, he asked about buying the store (oh boy). Jim wanted to get out of the lease. I agreed to sell it way below value to Ken, as long as he covered the lease. We agreed, signed documents, etc.

Jim decided he wanted OUT of being my partner. Suddenly. Like, about two weeks ago. (because lawsuits are scary, especially when you might be liable)

I paid Jim some money, and gave him back controlling interest in the debt owed by Ken to us. He worked something out with Ken, which documents I have not seen, the details of which I am not privy to. (I need to protect myself and my assets. I am not and have not been linked to Kenny financially or legally. For realz!)

This is where things stand now. (sure they do...)

I am no longer associated with Little Monster. (because that might cost me money)

I am no longer financially associated with Ken. (ditto)

Jim is bought out and now has only to deal with Ken. (But wait! I thought the business was sold by some Jim Sears! Oh wait, it was. Ah, so Ken's debt is owned by Jim Sears, and Jim sold Ken's current girlfriend Little Monster out from under Ken. But wait, Ken claims he sold the store...)

Ken blames me for his financial troubles (heh heh - Ken blames everyone but himself), even though I had recently agreed to buy the pencil machine for him to make pencils for his old Kickstarter thingy (mostly because he now has financial responsibility to Jim, instead of me, and I had not required him to make a payment in months, and had previously said I never cared if he made another payment to me or not). (so Marcus bought Ken a pencil machine BECAUSE Kenny was not making monthly payments for the purchase of the store. Sure, makes perfect fucking sense)

My long term loyalty to Ken has been because he saved my life.
It is not because we are tied at the hip financially (please PLEASE don't include me in Ken's lawsuit, which looks valid to me and I REALLY don't want my assets on the hook for Ken's shenanigans) . His buying the store from me/us at the time really was only of benefit to Jim, because it relieved Jim & Ken - allowing Ken a source of income (but will the associated costs, what real income was there - oh, that's right, Ken wasn't making payments), and relieving Jim from the financial responsibility of the lease, which I never was party to or responsible for (see me wash myu hands of as much financial responsibility as I can)

I just wanted to post this to let there be a public record of what has transpired (keep this in mind with Ken's lawsuit. I beg of you!)

If you want to bash me for my past blind loyalty to someone who saved my life (eh, I'll leave that to others. besides, this is just an attempt to protect yourself from Ken's liabilities), I reckon I got it coming from many of you.

I now wash my hands of all association with Ken (I think its too late for that Marcus. Seriously, if any part of the lawsuit against your were to stick to Mad Ox before, this doesn't chance shit), other than being his friend, if he decides he wants to remain friends.