Time to start sharing some picks for RPGNow's May D&D Sale. For the first picks, we going to look at some TSR Era titles.

The World of Greyhawk (1e) - "The World of Greyhawk is... suitable for use as the backdrop of a new campaign without changes; or, as an alternative, city, country or geographical descriptions can be used to fill in details for existing campaigns. The World of Greyhawk is in the form of a gazetteer written by a historian native to the region, and as such includes the calendar systems used by the peoples of Oerth, a history of the major nations over the last thousand years, a discussion of climate in the different regions of the world, and even an appendix listing many runes and symbols (and their meanings) which are found in ancient and magical writings." 4.99  3.99 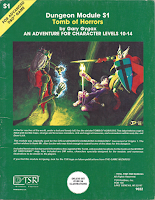 S1 Tomb of Horrors (1e) - "In the far reaches of the world, under a lost and lonely hill, lies the sinister Tomb of Horrors. This labyrinthine crypt is filled with terrible traps, strange and ferocious monsters, rich and magical treasures, and somewhere within rests the evil Demi-Lich.  This adventure was originally used for the Official Advanced Dungeons & Dragons tournament at the FIRST Origins Convention. Included herein are background information, the Legend of the Tomb, and possible locations for the tomb on the World of Greyhawk map. Also included are DM notes, characters specially designed for the module, and numerous illustrations to be shown to the players."  4.99  3.99 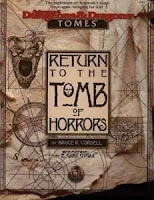 Return to the Tomb of Horrors (2e) - "The sinister wizard Acererak took great pains to safeguard his tomb. It took many years, and many more lives, before his evil was finally laid to rest. But though the demilich is gone, he is not forgotten. Others who would become as he was have traveled to the site of Acererak's tomb seeking the secrets of mastery over death. Slowly these pilgrims gathered, eventually building in the shadow of the tomb itself a community dedicated to the dark arts: Skull City. This... adventure contains: A 160-page adventure book; A 32-page book of illustrations to be shown to players; Player handouts, including an adventurer's diary filled with clues; A 16-page book of maps and monsters; And a reprinted facsimile of the original Tomb of Horrors adventure module as first published in 1978. Return to the Tomb of Horrors is an epic adventure for characters of levels 13-16."
9.99  7.99 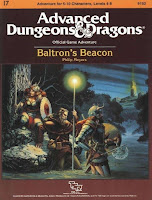 I7 Baltron's Beacon (1e) - (note: I never saw or heard of this release before - go figure) - "A strangely delivered advertisement has led you to a sage named Demetrios. He needs a rare component to complete a desperately needed potion. The journey to retrieve it will take you through a large, unexplored swamp to a ruined keep, the former headquarters of a vile cult that once claimed the lives of many innocent youths. To solve the mysteries of "Baltron's Beacon," the characters must excel in handling wilderness, building ruins, traps, puzzles, and new monsters. This adventure, originally designed for tournament use, is now available for your own campaign. An adventure for 5-10 characters of levels 4th-8th.  4.99  3.99 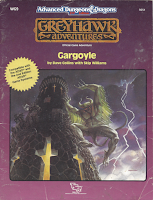 WG9 Gargoyle (1e/2e) - (Note: another title I don't recall from my earlier days of gaming - damn!) - "Ever seen a gargoyle without its wings? It's a pretty funny sight. But don't laugh out loud in front of them-they don't think it's all that hilarious? Gargoyle is an adventure set in the world of Greyhawk, the longest running of TSR's game worlds for the Advanced Dungeons & Dragons game. A pair of gargoyles wake up one morning to find their wings missing, and contact the players to help recover them. A great many AD&D players have been asking for low-level adventures suitable for beginners, and Gargoyle is the first of several planned for this year. Designed for levels 2 to 4, this adventure can be enjoyed by novices and experienced players alike."  4.99  3.99 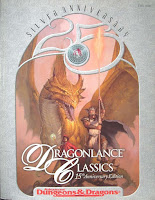 Dragonlance Classics: 15th Anniversary Edition (2e/SAGA) - "To celebrate the 15th anniversary of the publication of the first DRAGONLANCE adventure TSR proudly presents a retelling of the greatest fantasy roleplaying epic ever. Players can assume the roles of Raistlin, Tasslehoff, Tanis, and other Heroes of the Lance, or create original heroes. The DRAGONLANCE Classics 15th Anniversary Edition features many all-new scenes, including meetings with Dalamar, Ariakan, and other more recent additions to the Saga. It is fully compatible with both the AD&D and SAGA(r) game rules."