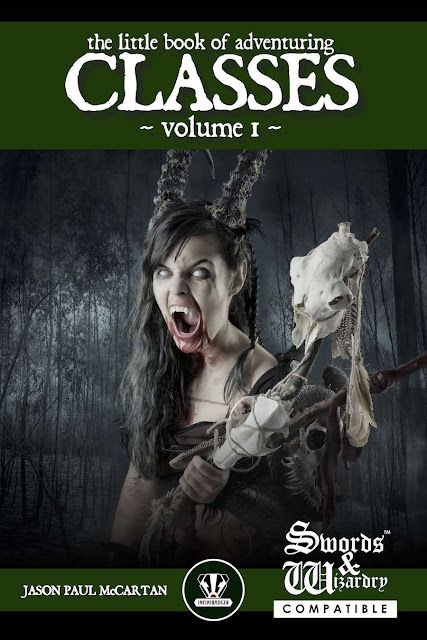 I was excited when I had heard that Jason Paul McCartan, he who is InfiniBadger Press, was working on a book of classes for Swords & Wizardry. Jason does good work and I was looking forward to seeing what he would come up with. Then he teased the cover art in The Tavern's Facebook Community. Damn but its a good cover!

Well, this morning I received notice that The Little Book of Adventuring Classes Vol. 1 had released. 40 pages including cover. The classes look solid (I'll offer a review later in the week) and there even appears to be a class inspired, in part, by our very own #ConManKen. I'll let you guess which one that is ;)


The first volume in a series of minimalist design, small page-count books offering big play options for your gaming table.

In this volume, we present 5 new races for your games, along with 8 new classes tied to some of the races as well as races in the core book. Will you play a Bugbear Stalker, a Halfling Grifter, or a Dragonkin Radiant? What about a Goblin Firespitter, or a Dwarven Bloodstormer? If your current character dies, will they come back as a Reaver?

This supplement for the Swords & Wizardry roleplaying game works best with the Complete version of the game, but can easily be converted to work with the other older versions. The content within can also be readily used with other roleplaying game systems if you have an alternative favorite rule set.

Yep, that's an affiliate link above. Keep the lights on and the taps flowing at The Tavern with your support.

Oh, and yes - Jason is a good friend of mine. Despite that fact, he does damn good work and this appears to be more of his high-quality work :)