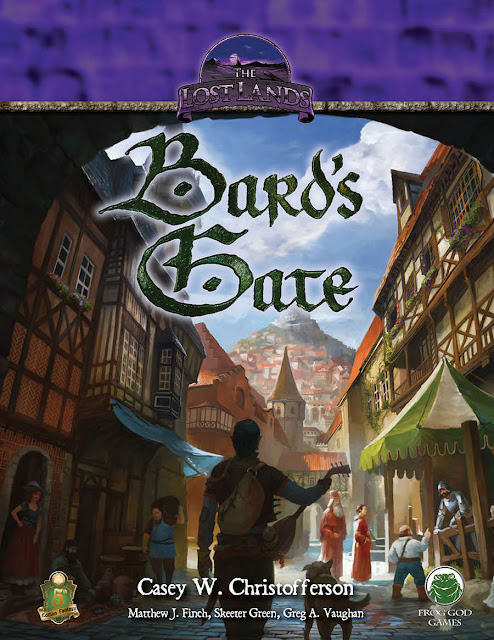 Let me give you a small piece of inside information on Bard's Gate. Your humble bartender was approached to write a small entry for an establishment that would have effectively been Tenkar's Tavern. While I agreed without hesitation, the events in my personal life at the time (especially my impending retirement and crazy work hours) kept me from accomplishing what was needed. Who do you turn to in such a predicament? None other than +James Spahn . So, when you read the entry for what is effectively Tenkar's Tavern, know who it was that pulled my butt from the fire...

Oh, needless to say I think its one of the best Frog God releases ever, and I have nearly all and there are few that aren't readily available on my nearby desk shelf, waiting to be used or referenced. It has nothing to do with The Tavern being within the city walls. Well, maybe a wee nit ;)

There are also a crap ton of Easter Eggs within for those that know personas in the gaming community, past and present. NPCs, locations, streets - many names will look familiar and even their placement often has a hidden meaning.

Can you use this readily with an OSR ruleset? I think so. I find setting material to be easier to convert on the fly than adventures (and i convert those on the fly too, so maybe I am not the one to talk ;)


City of the Lyre

Established centuries ago as little more than a ferry for travelers between the ancient cities of Tsen in the north and Remenos and Curgantium in the west, over the years Bard’s Gate has grown from a small river crossing tended by a pig farmer into an important center of learning and trade. The city is famed far and wide as a bastion of the arts that welcomes bards, performers, writers, artists and crafters of all sorts. It is a beacon of civilization and a pillar of the western world.Yet this citadel of enlightenment is also threatened by dark forces — gnolls and orcs from the Stoneheart Mountains, cults of evil gods lurking within and without, and the machinations of rivals and allies alike threaten the city daily, for the very freedom that draws artists and musicians from around the world also allows evil to flourish.

While Bard’s Gate serves as a cornerstone for The Lost Lands, it is also a fully-developed fantasy city that can be used in any campaign. A wide range of businesses and shops, churches and temples, homes, taverns, inns and other locations are described in detail, ready made for your ease of use. Bard’s Gate is filled with unique NPCs, from the most influential leaders and wealthiest merchants on high to the lowliest beggar living in the gutter.After a decade of playability, with the associated stories, tall tales, lies, and legends, Frog God Games presents you with the updated and reimagined The Lost Lands: Bard’s Gate. In striking full-color, and more than doubling the size of the original, The Lost Lands: Bard’s Gate details hundreds of individual locations and NPCs, gives an overview of the Lyre Valley and a complete history of the city, and quadruples the number of adventures that were found in the original, raising the total to 8. The adventures contained within are suitable for player characters of 1st level to 10th and even beyond. More than 20 pages of random encounter tables and descriptions give additional unique opportunities to fine-tune the city to your tastes. The Lost Lands: Bard’s Gate is not just for The Lost Lands campaign setting, it is designed with enough flexibility to be used in any campaign. Whoever you may be, whether prince or pauper, if you are a seeker of adventure, Bard’s Gate welcomes you!

I swim in the Frog's Pond these days, but I'm barely a pollywog. James Spahn is a damn good friend of mine and not just because he pulled my ass from the fire. Neither makes this anything less than the amazing deal it is. Yes, that's an affiliate link above. Affiliate sales are the magic that keeps the taps flowing here at The Tavern.

Email ThisBlogThis!Share to TwitterShare to FacebookShare to Pinterest
Labels: 5e, bards gate, deal of the day