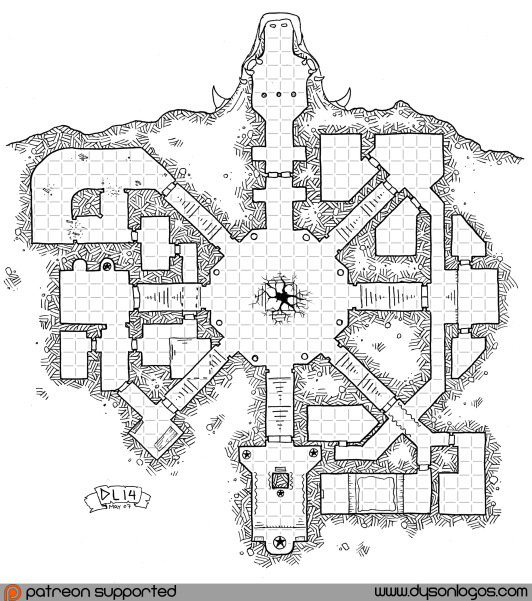 If you only have the ability to back one RPG related Patreon I implore you to back Dyson's. For as little as 50 cents a map you are supporting a creator that has released dozens of professional drawn maps for free commercial use. That's the resources I'm using here.

Supporting the The Tavern via Patreon or Paypal subscription allows me to put time aside to create weekly monsters and magic items for Swords & Wizardry Light (and other OSR games) and post them for free at The Tavern. Purchases made via The Tavern's RPGNow affiliate links are funding the free adventure for the month of October (we had a goal to raise $300 in affiliate monies and we did) Half the monies raised for the rest of the month are going towards art purchases - commissioned and / or stock art.

Notice the top of the map? That certainly looks like a dragon's head. I wouldn't mind commissioning a pencil / ink drawing of a party of adventurers entering the dragon's mouth. Art budget is probably going to come in between 60 and 75 bucks (currently sitting at 40), which is less than I would like so I may dig into the till. We'll see.

I'm pretty damn excited to be doing this if you couldn't tell. Heh!

In any case, this was all funded by you, Thew Tavern's Readers. Thank you :)
Posted by Tenkar at 6:37 PM