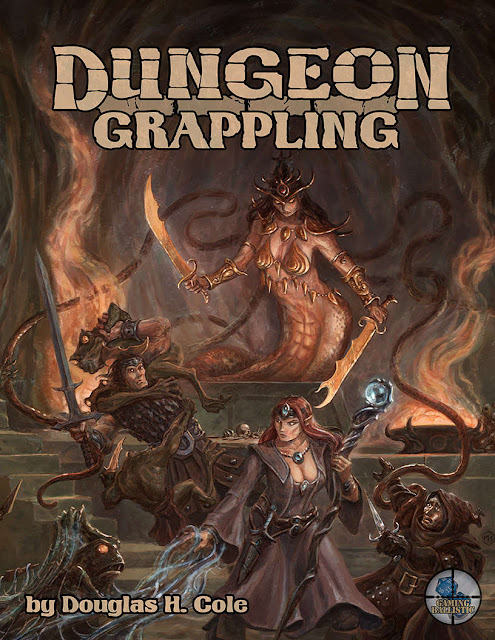 My introduction to grappling in RPGs came with my first ever RPG - AD&D 1e. Remember those arcane tables that didn't follow anything else that seemed like D&D and made little sense, at least to me?

Well, Dungeon Grappling is the opposite of that. As +Douglas Cole , the author, has been known to say - these are grappling rules that "Don't Suck" and he's right. Normally priced at $7.50 in PDF, until tomorrow morning at 11 AM Eastern Dungeon Grappling is on sale for $2.85.


From the first story ever told, to tales on the silver screen. They all have at least one thing in common: Grappling.

Grappling is thrilling, dangerous, and drives thousands of years of epic storytelling.
Dungeon Grappling brings those thrills to the oldest fantasy RPG with rules and examples for Swords and Wizardry (and other OSR-style games), the Pathfinder Roleplaying Game, and 5e.

What’s in the Book

First and foremost, this book contains rules based on Open Gaming License content from several editions of the industry’s most popular RPG – explicit examples for Swords and Wizardry, the Pathfinder Roleplaying Game, and Fifth Edition.

Just a reminder - Through Dungeons Deeper: A Survival Guide For Dungeoneers As Written By A Survivor released today. If you go to The Tavern post that announces the release, you will find a discounted link to save you 3 bucks off the regular PDF price.

All purchases made via The Tavern's affiliate links put coins in The Tavern's coffers. Thanks to The Tavern's readers, I already owe you an adventure in October. Further monies raised in September will allow for future art purchases. Thank you :)

Email ThisBlogThis!Share to TwitterShare to FacebookShare to Pinterest
Labels: deal of the day, dungeon grappling