How the fuck did I miss this anniversary? Six years. Traditionally, that's a gift of Iron in the US. All I know is that as backers all we've gotten is broken promises and lies. Shit - it almost sounds like we're in a real relationship.

Gareth has been silent for over two months now. Actually, two and a half months. The update is from May 1st of this year. April 1st may have been more appropriate. 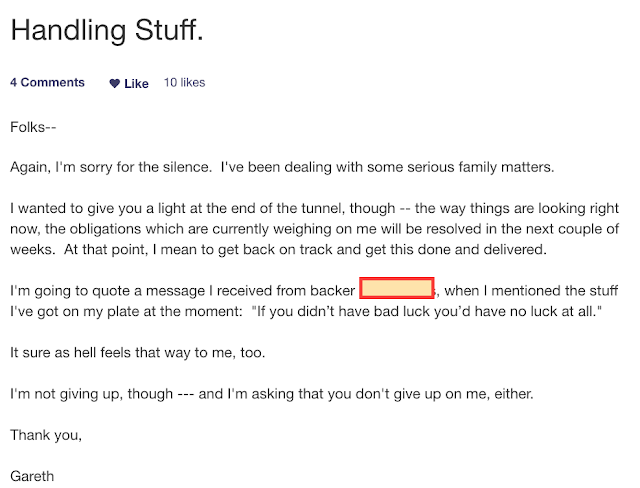 I understand family matters and obligations. These are things one has little control over. Obviously Gareth does not have five minutes in any of his days to update his backers over the last 10 weeks.


But look at that! Just went to Gareth's Twitter feed. Still tweeting away. Every day. All day.

Can't spend five minutes saying "Shit's still shitty. Hoping to have something for you soon. Will update in a few weeks" or some other method of appeasing the masses. Sure, it would be a stroke job, but for 150 bucks I deserve something ;)

See, this is what REALLY irks me. Its not the lies. Its not the broken promises. It the idea that after six years the backers just don't matter.

He went to a con and did a podcast interview shortly after his last update. He tweets every day. Yet for the backers that pledged nearly $50k to bring Far West alive, all we have gotten is carnival tricks. Smoke and mirrors.

At least we have gotten a view of the real Gareth Sharka. It aint pretty but its real.
Posted by Tenkar at 7:39 PM