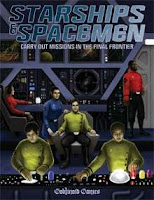 Starships & Spacemen 2e - Labyrinth Lord in Spaaaaccceeeeee! I'd love to play in a White Star / Starships & Spaceman mashup ;) - "Boldly explore the galaxy in search of alien civilizations! You take the role of a Military Officer, Technical Officer, Science Officer, or Enlisted Man in the Galactic Confederation. Travel in a starship under your command, on missions of first contact, rescue, exploration, and more in a galaxy full of hostile aliens. Try to maintain the tenuous truce with the militaristic Zangid, and fight the Videni who may look like your Tauran allies, but do not adhere to a philosophy of peace and logic.

Mutant Future - Labyrinth Lord meets Gamma World. Oh my! - "The sinister and sadistic bleating of spidergoats echoes in the night, a complementary chorus to the rustling of an unfortunate victim caught in their webs. In deep, dank caves to the north, corrupted humans take communion with an unspeakably evil abomination they worship as a god. Shrill cries from the fields can only mean the vomit flies are back, molesting your livestock. In short, just another day in the Mutant Future!

Mutant Future is a post-apocalyptic science fantasy RPG, in the same flavor of similar genre games from the late 70s and early 80s. The game is almost entirely open game content, and a free trademark license allows anyone to publish materials compatible with Mutant Future.

Apes Victorious - Labyrinth Lord meets... you guessed it... Planet of the Apes - Apes Victorious is a roleplaying game in which you take the role of an astronaut from the 1970’s who finds himself marooned on a future Earth ruled by intelligent apes. Players may also take the role of an ape, a degenerated human, or a psi-active under dweller. Fight to survive in this post-apocalyptic future ruled by four species of apes. Or play apes who hunt humans for sport. For a different kind of campaign, play highly intelligent but insane under dwellers who have advanced technology and powerful psi powers.

Grab them all and play the genre mashup - Mutant Apes & Spacemen in Spaceship Labyrinths!

Remember, the art free version of Labyrinth Lord is free.


Remember, your use of The Tavern's affiliate links helps keep the candles burning and the taps flowing at The Tavern. As always, we thank you.