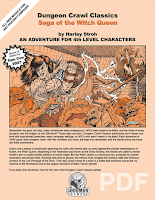 Saga of the Witch Queen - Lets look back to the Summer of 2007, when Goodman Games released Saga of the Witch Queen at Gen Con. A 1e adventure for AD&D 1e, it is one of +Harley Stroh 's earlier works. Conversion by +Jon Hershberger - "Drawn into a series of adventures spanning the north, the heroes take up arms against the sinister machinations of Kyleth, the Witch Queen. Beginning in the miserable bog known as the Great Swamp, the heroes are called to thwart Kyleth’s plot to create sinister artifacts of unholy blight. But the Witch Queen is a tenacious foe, protected by wicked dweomers and ancient rites. Running their prey to ground, the heroes must navigate the perilous halls and torturous caverns of the Lost Passage of the Drow. Their epic quest comes to a head in a battle that stretches across the icy reaches of the Northlands and to the stygian demesne of Baba Yazoth herself!"  $9.99  $8.49

Frozen Fortress of the Winter Warlord - This time we only are going back to 2014. Amazing cover +James Spahn -  "Cold Be Hand and Heart and Bone!and written by none other than our very own Frozen Fortress of the Winter Warlord is an adventure module for 4 - 6 characters of 9th - 12th level for Labyrinth Lord and other old school fantasy role-playing games. Utilizing rules in both the Labyrinth Lord core rules and the Advanced Edition Companion, this huge adventure pits the characters against foes of undead and ice!"

In addition to the adventure Frozen Fortress of the Winter Warlord includes...

-A complete dossier on the village of Winterhome, an adventuring location that can easily be inserted into any fantasy campaign - including NPCs and a rumor table!
-Seven new magic items
-Ten original monsters for use in any old school fantasy role-playing game
-Optional rules for frigid temperatures and how to survive them

Lost City of the Dwarves Part 1:Discovery - They had me with Dwarves. Really. Slam dunk - "The first book in the Path of Legends gaming book series which allows you to choose the path of your adventure while using a dice-rolling combat system. The refined OSRIC-compatible adventure system (old school d20 RPG) has a minimal learning time but covers the most used aspects of old school gaming. In no time you’ll be hunting for enchanted items, battling goblins, rat-men and other creatures, enhancing your combat with a variety of potions and solving puzzles with deadly traps. Best of all, the character that you create, level up and spend time building in this adventure can be used continually in all of the Path of Legends books as you travel the path to becoming a living legend."  $5.99  $5.09

Remember, your use of The Tavern's affiliate links helps keep the candles burning and the taps flowing at The Tavern. As always, we thank you.
Posted by Tenkar at 5:39 PM