DCC Lankhmar releases in PDF Just 2 Bucks Each at RPGNow 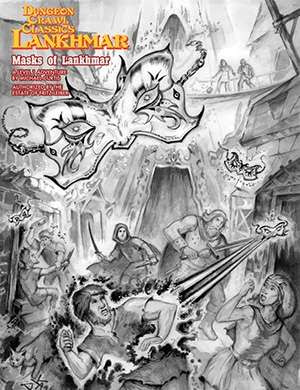 Two bucks a piece for the Goodman Games DCC Lankhmar releases? If I didn't already have them in print I'd be all over this ;)

DCC Lankhmar: Masks of Lankhmar - A level 1 adventure for DCC RPG - A heist gone wrong brings an unlikely group of thieves together and sets off a search for forgotten treasures hidden in the City of the Black Toga! Can our heroes of questionable moral character survive the twisting chase that leads through the Plaza of Dark Delights, crosses paths with Sheelba of the Eyeless Face, and delves into one of the oddest tenements in Lankhmar? Not if the Thieves’ Guild has their way!

DCC Lankhmar: Through Ningauble's Cave - Tread in the footsteps of the legendary Fafhrd and the Gray Mouser! - Through Ningauble’s Cave is the first release in the Dungeon Crawl Classics line of Lankhmar supplements. As we build toward a large boxed set, this “first-look” sourcebook provides DCC RPG judges with all the information needed to journey to the world of Nehwon, home to Lankhmar, the fabled City of the Black Toga. - Through Ningauble’s Gate details the secrets of Ningauble of the Seven Eyes. It includes rules for using him as a patron, as well as information on his fantastic cave that touches multiple worlds. With the material in this book, your players can journey to Nehwon…or have Nehwon come to your campaign world!

DCC Lankhmar: Patrons of Lankhmar - From beneath the Outer Ocean, from out of the depths of the Great Salt Marsh, and from the odd fanes of the Street of the Gods, they come: the Patrons of Lankhmar! With the information contained in this tome, a judge can introduce such formidable beings as the Sea King, Mog the Spider God, Sheelba of the Eyeless Face, and even Death himself into any DCC RPG campaign setting. - This early look at the upcoming Dungeon Crawl Classics Lankhmar line introduces a half-dozen supernatural powers and eerie entities for use in your DCC RPG or Lankhmar campaign. Each power’s entry includes details on the entity and their role in Nehwon, tables for invoking that power’s aid, corruption charts for when things go wrong, and new spellburn possibilities. Are you ready to serve the Patrons of Lankhmar?

5% of your purchases at RPGNow go to support The Tavern/
Posted by Tenkar at 8:15 AM