Yep, we are under the 24 hour mark for time remaining i the RPGNow GM's Sale. These will be my last picks. That doesn't mean if something didn't make my pick list that it wasn't good - it probably means I ran out of space.

It also means time is running out at these sale prices. Next major RPGNow sale will probably be Christmas in July.

Slumbering Ursine Dunes - I think someone else said it better than I ever could - "Want a healing potion? No generic shit in this, you’ll instead be drinking the pure white soul of someone who has drowned in a pond." - Bryce Lynch, Ten Foot Pole - There ya go ;) - "Run, play or splice up 66 pages of mayhem and weirdness in this Slavic mythic-inspired (with an acid fantasy-twist) mini-sandbox for Labyrinth Lord or the well-aged fantasy rpg of your druthers. What You Will Find Inside: • A 25-site pointcrawl of the otherwordly Slumbering Ursine Dunes region. Beyond the big ticket adventure sites you will find along the way a Polevik-haunted rye field, a Zardoz head-living hermit, bearling pilgrimage site, antediluvian beaver engineers and other assorted madness. • Two separate “dungeons”, the bio-mechanical, lost-in-time Golden Barge and the faction-contested Glittering Tower, with enough detail and portability to be slotted into an existing campaign. • The Chaos Index, a dynamic events system for modeling the mythic weirdness of the Dunes. Actions of the players in the sandbox will escalate or de-escalate the levels of events. • Four competing factions operating inside the Dunes, plus guidelines for their mutual interactions. • Unique player classes, spells and magic items compatible with Labyrinth Lord. • 15 new and unique monsters, many drawn from Slavic mythology (with a twist or three, naturally)." $9.00  $6.30

The Wizardarium of Calabraxis - some of my picks are downright cheap. amazing quality and price. grab this now! - "17 pages of fun, built around a core of an easy to run 2 page overview. The Wizardarium of Calabraxis starts off with strangely behaving apemen, but players who start to explore the cave where they reside will soon discover there is a lot going on: ancient civilizations, the mad experiments of a forgotten wizard, and a couple unique magic items are guaranteed to provide a lot of bang for your buck to your players. This module has stats for the DCCRPG, but if one wants to work around the weird dice, this module is probably at home in just about any OSR rules system. Characters of almost any DCC level will probably have fun in this adventure; just adjust some numbers until the exact right number of PCs are dying ;)" $1.95  $1.50 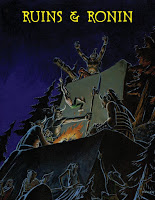 Ruins & Ronin - Ah, did you think I was done with the awesome and inexpensive selections? Well, you were wrong. Maybe medieval fantasy isn't your style. Maybe you want to adventure in the orient. Maybe you want your non European setting rules to be Swords & - Wizardry derived - "A complete set of rules for playing an old school fantasy game (Swords & Wizardry compatible) in a medieval Japanese-like setting.  What's inside: Unique player classes and races. Japanese-styled weapons, equipment and magic items.  A complete 32-page bestiary of monsters and spirits."
$2.00  $1.40 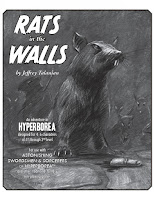 Labyrinth Lord: Revised Edition - sure, you could grab the free art PDF, but where is fantasy gaming without awesome art? -"Enter a world filled with labyrinths, magic, and monsters! You can take the role of a cleric, dwarf, elf, fighter, halfling, magic-user, or thief on your quest for glory, treasure, and adventure! This is a complete role playing game. All you need are a few sheets of paper and some dice. Welcome back to a simpler old-school gaming experience. The Labyrinth Lord awaits your arrival. Can you survive the dangers of the labyrinth?" $5.95  $4.17

Rats in the Walls - you didn't think we'd get through this without referencing "rats" did you? besides, its an excellent adventure - "An adventure in HYPERBOREA designed for 4–6 characters of 1st through 2nd level. For use with Astonishing Swordsmen & Sorcerers of Hyperborea™ and other traditional fantasy role-playing games. In the City-State of Khromarium, a dockside tavern called the Silvery Eel is plagued by rats of a most unusual breed. These abominable rodents have ruined the tavern keeper’s business and his life. The man is desperate, and he offers a substantial reward for the elimination of his horrific problem." $4.29  $3.00

White Box Gothic [Swords & Wizardry] - this is the type of fantasy / old school horror that I really enjoy - not to hack it for SWL ;) - "White Box Gothic brings gothic horror to your Swords & Wizardry WhiteBox campaign! Inside this terrible tome you'll find a horde of horrors! - Six New Classes: From the deadly Monster Hunter to the damned Dhampir. - Thirty New Spells: Speak with the dead, defile the land, and bind spirits to your service! - Twenty-Five New Magic Items: Draw undead servants from your Bag of Bones, learn the secrets of the Book of the Damned, and draw hope from the Symbol of Piety! - Fifteen New Monsters: The lowly Cultist, the mysterious Breath Stealer, to the powerful Vampire Lord! - Optional Rules: Corruption, Dread, and laying Curses! - Inside these fifty pages you'll find all manner of dark and dire secrets to vex your players and defy the undead! $4.99  $3.49

Feast of the Preserver - A horror adventure for the DCC RPG? Its like chocolate and peanut butter -"Feast of the Preserver is a survival horror adventure designed for a group of 5 to 8 characters of levels 3 to 4. Something is amiss in the isolated village of Barrowton. Only courage, skill and a lot of luck can aid the adventurers in facing the horror that has taken hold of this once idyllic place. Can the adventurers save the village from a terrible fate or will they become the Feast of the Preserver? Features: Mystery and excitement compatible with Goodman Games Dungeon Crawl Classics RPG but easily converted to other systems - Over 40 pages of blood chilling suspence and horror - Beautifully rendered isometric maps by Brian Van Hunsel - New evil magic to destroy or be destroyed by" $4.99  $3.49 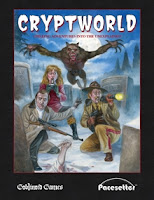 Cryptworld - Back in my college days of gaming, I really enjoyed Chill! Then they made a hardcover book for it and I didn't enjoy it anymore. I enjoy Cryptworld, the spiritual successor - "CRYPTWORLD is a horror role-playing game in which you investigate and hunt the forces of the unexplained. The Crypt Master may design any world of horror he desires. Classic horror, slasher horror, alien menaces from the stars and interdimensional monsters. These horrors and more may greet you in CRYPTWORLD! - CRYPTWORLD is a role-playing game complete in one volume. - In this book you will find: - Rules for character generation - Optional paranormal talents - Creatures covering multiple horror genres - Advice for running horror games - An introductory adventure... and more!" $7.95  $5.57