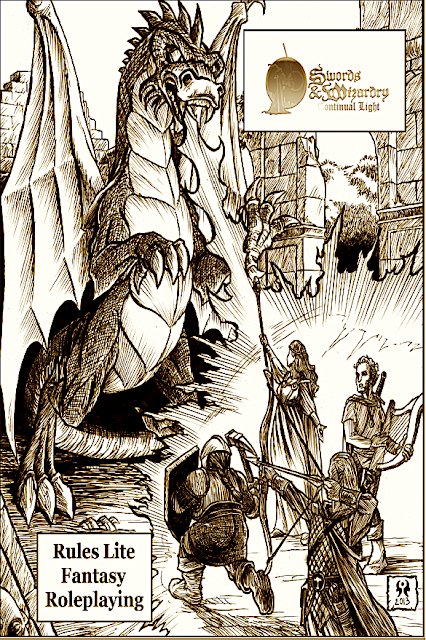 A few bits of news for those interested in Swords & Wizardry Light / Continual Light.

Gary Con is going to have some major SWL stuff going on. +Zach Glazar , +Michael Badolato and myself will have some goodies to give out. Folders, folios, character cards and even two dozen or some copies of Swords & Wizardry Continual Light - taking your games to level seven. SWCL will be digest sized, signed and numbered and very limited in number for the Gary Con release. I'm figuring two dozen copies tops for the con. I'll hand out maybe five copies a day Wednesday through Sunday.

The official release date for Swords & Wizardry Continual Light will be Swords & Wizardry Appreciation Day (April 15th, 2017 I do believe) It will be free in PDF and low cost in print. I'm totally guessing on the following price points for print which ARE NOT set in stone:

If you want multiple copies for your gaming group we'll work something out.

Swords & Wizardry Continual Light will be digest sized and printed via a laser printer.

Swords & Wizardry Continual Light Deluxe (working title) will follow later (I'm hoping NTRPG Con but we will see). That will include seven adventures (one for each level covered by the rules) as well as a small sandbox. Pricing to be determined. I'm hoping to use a sepia colored cover for this version.

Torchlight. We are aiming for late spring / early summer release for the first issue of the Torchlight Zine, the "Official" Zine of SWL. Current plans are 16 to 24 pages, quarterly, with half of each issue dedicated to a SWL "hack " - sci-fi, old ones horror, western, dark fantasy, etc - that will give classes, some creatures and probably a small sandbox. The rest of the issue will be assorted SWL miscellany. Yes, I have certain hacks in mind.

The official publisher of SWCL as well as Torchlight is Triumvirate Tavern Publishing. Three emperors. One awesome ruleset :)