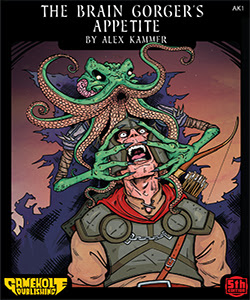 The Brain Gorger's Appetite (for 5e) just released at the Frog God Games webstore. From what I can tell, this is the first third party product carried at the FGGs store, which is impressive unto itself. You know its a quality release if Bill Web approves of it. Heck, its the rare gaming release I read cover to cover.

Remember, orders of physical items, such as The Brain Gorger's Appetite, will have a copy of Swords & Wizardry Light included in the package for free. Just sayin'. $14.99 in Print. $5 in PDF.


For the most part, the town of Ockney’s Hold has always been a peaceful place—bordering on boring. The most interesting things going on in this frontier mining settlement include the annual livestock fair, the cost of spirits at its various inns, and speculation fueled by those same spirits as to what foul things are being dumped into the river by the ore refinery. Recently, however, the usually placid Baron Reinson has begun to act erratically, ignoring most of his counselors, giving more responsibility to his equally erratic chamberlain, and replacing key figures in Ockney’s Hold with outsiders. With no clear answers as to what might be behind the baron’s strange behavior, his last loyal counselor seeks out a band of adventurers to help. Will these brave heroes be able to get to the bottom of a widening conspiracy? And can they expose the terrible and unseen forces manipulating the baron in time to save Ockney’s Hold?