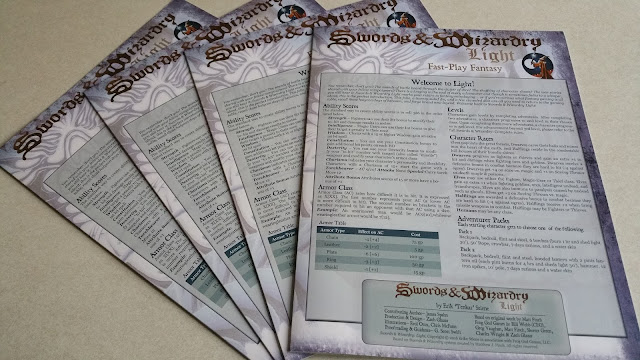 So, I received my four, early release copies of Swords & Wizardry Light in the mail today. These are the same pieces that will be given out, first come, first served by Frog God Games at GameHole Con this weekend. If you are going, make sure to snag your copy early, because supplies are limited.

Holding these copies brought a certain sense of joy I hadn't experienced prior. Sure, I've written for Knockspell, had some minor 3rd party S&W releases a few years ago and I wrote an adventure for Saga of the Splintered Realm, but Swords & Wizardry Light is different. It was a joy to bring it to this point.

The GameHole Con copies are an early release of sorts, as the main shipment is coming from China.

To the best of my knowledge, Swords & Wizardry Light is the only official flavor of Swords & Wizardry not copyright by +Matt Finch . It is an honor I had not expected and I will do my best to ensure that SWL has a long and vibrant life. S&W Light is a community ruleset first and foremost, and I am happy you will all soon be sharing in it with me.

The release of the Swords & Wizardry Light PDF is imminent. As in SOON. Be warned though, the initial PDF release is pretty much the same file that was sent to the printer, so its pretty on your computer screen but might not be as printer friendly as you will want. Printer friendly and MS Word versions will follow shortly thereafter.

Quick reminder. Tavern Chat is tonight but I wont be hosting. Your bartender feels like shit. I might pop in for a few minutes but that is all.