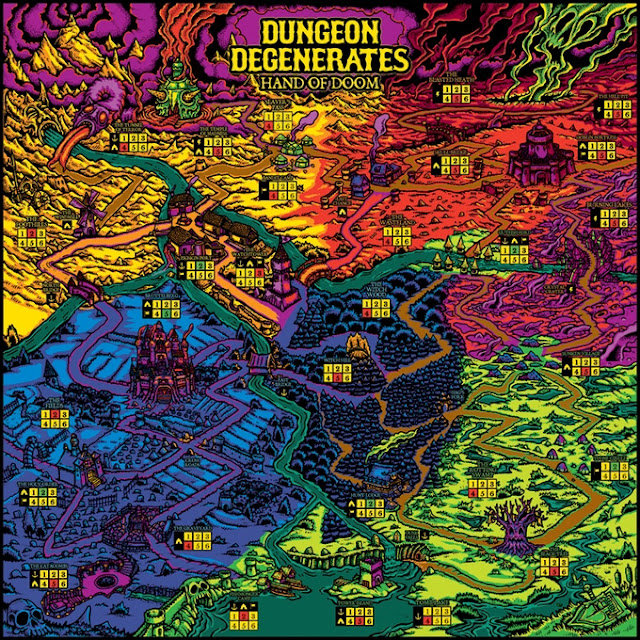 I've been trying to steer clear boardgames on Kickstarter. Not because they aren't good, they generally are. It's simply space. The Conan board game arrived in two huge boxes. It's killing me.

Dungeon Degenerates - Hand of Doom simply looks awesome. I love the art. Hell, i could mount the above game board on a wall in my mancave (such as it is). I will find room for this, damn it!

$55 for the basic buy in for a sandbox board game? Characters can gain abilities and carry over between sessions?

Here's a list of features (with some highlights by me)

-1-4 players co-op
-Players can form parties or split up throughout the game at will - no forced obligation to compete or stick together
-1-3 hours gameplay based on mission
-Epic RPG campaign feel in an open world sandbox board game
-Play until you die - bring your experience & items from previous missions
-Open exploration - no forced path
-Multiple missions & objectives of varying difficulty for high replayability
-Multiple ways to approach each mission
-Set in a cohesive & fixed world with multiple distinct regions
-Regions feature unique encounters & thematic monsters
-Encounters allow multiple interaction choices - you do not have to fight everyone you see
-Open experience system allowing for character customization with new skills
-You are always in danger - the town is not an artificial safe zone - combat is dangerous
-Various modes of travel - players cooperate to choose their route & pace, or split up & fend for themselves
-Customize difficulty & theme with expanded monster & encounter decks
-Streamlined combat with tactical depth, each player rolls dice only once on their turn
-Uses standard 6-sided dice only
-Over 100 monsters with unique abilities & artwork
Posted by Tenkar at 7:19 PM

Email ThisBlogThis!Share to TwitterShare to FacebookShare to Pinterest
Labels: board games, kickstarter