Real quick and short post, as I've hit the "foggy headed" stage of congestion. Time to mix alcohol and decongestants! (no, not really). Here are some scenarios for Operation White Box: 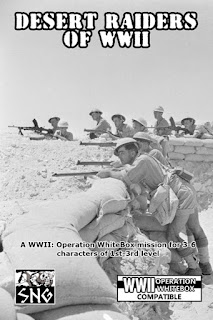 DESERT RAIDERS OF WWII is a collection of three (3) support missions designed for WWII: Operation WhiteBox™. Join the SAS and the LRDG and take part in historic raids against the Germans during the North Africa Campaign!

RAID ON LUFWAFFE-32: Sneak into a Luftwaffe airfield at night and blow up as many planes as you can!

PANZERS IN THE SAND: Locate the enemy tank column before it can reinforce the Germans attacking El Alamein!

AFRIKA KORPS IN KAOS: The German general wants to secretly meet and negotiate a surrender. Could this be the end of the fighting in North Africa or is it only a diabolical trap!

Desert Raiders of WWII is designed for 3-6 characters of 1st-3rd level. 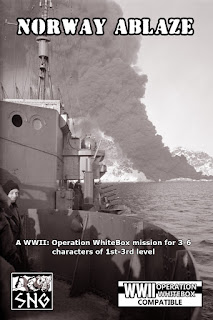 Norway Ablaze is a mission pack for WWII: Operation WhiteBox. It contains three (3) short missions that loosely emulate the events of Operation Claymore---a series of British commando raids on the Lofoten Islands of Norway.

RELAY STATION RAID: Destroy the relay station so the Germans can't call in reinforcements or air support from the Luftwaffe!

FISH OIL FRACAS: Infiltrate a fish oil refinery and destroy its stores of fish oil to keep the Nazis from manufacturing high explosives!

BUNKER ASSAULT: Take out the German bunker whose guns are keeping the commandos from escaping the island!

Norway Ablaze is designed for 3-6 characters of 1st-3rd level.