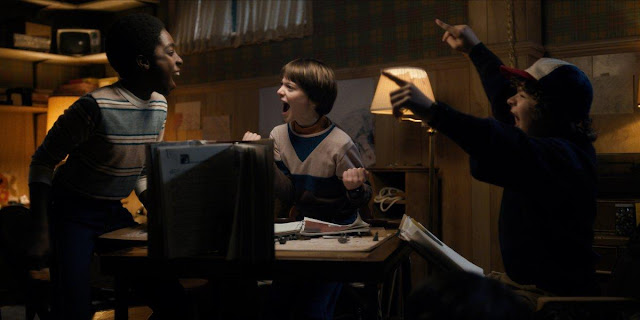 There is a D&D article in the New York Daily News, talking about how the Netflix series Stranger Things is bringing the game back into the light:

Dungeons & Dragons is rampaging across pop culture like a fearsome Demogorgon.
The quintessential game for geeks is resurging 42 years after it was first published. It’s a central plot device in the Netflix summer hit “Stranger Things.” It plays heavily in “The Dwarvenaut” documentary hitting VOD on Friday, about a Brooklyn artist who crafts dungeon models and figurines. And “Divergent’s” Ansel Elgort is in talks to conjure himself into a live-action D&D film.

“We’re going through a renaissance here. It’s just so much fun to play,” says Stefan Pokorny, the D&D addict who is ready for his closeup in “The Dwarvenaut.” “The kids in the 80s, the 12 and 13-year-olds who were playing, the outcasts who were told they were nerds — now we’re 40 and 50 years old like, ‘Screw you guys — I still love this game!’”

Which is all fine and good, but it's the next paragraph that I find most interesting:


If you’ve been too cool to crack open a Dungeon Master’s guide or roll a 12-sided die, you’re becoming the odd man out. Or odd woman out, as role-playing games have expanded their gender roles. While Wizards of the Coast, which manages the D&D franchise, won't share sales figures, reps tell the Daily News that Millennials (ages 25 to 34) presently make up the largest group of D&D players, followed closely by those aged 35 to 44 and 18 to 24 — and up to 30% of these gamers are girls.

So, up to 30% of current D&D players are girls. About what I would have pegged it back in High School and College - 20 to 25%, and almost all brought in by their significant others. So, the percentage of female gamers hasn't changed much, but the age group is skewing higher, and older gamers generally have more disposable income, which is good for the market.

It's nice to see The Dwarvenaut also get some attention.
Posted by Tenkar at 9:50 PM

Email ThisBlogThis!Share to TwitterShare to FacebookShare to Pinterest
Labels: dungeons and dragons, netflix