Ken Whitman - KotDT: LAS is DONE! But Ken Wants to Get Paid - Again!

Yep, according to Ken, Knights of the Dinner table: Live Action Series is ready to go out to backers and has been for the past month. He's just holding out to shake a third party down for money for distribution rights.

From what I understand, Marc Miller does NOT have a deal with Kenzer to distribute KotDT: LAS nor does Ken have distribution rights that he can sell - those belong to Kenzer.

But hey, all's fair while trying to shake down a mark for a few thousand bucks. 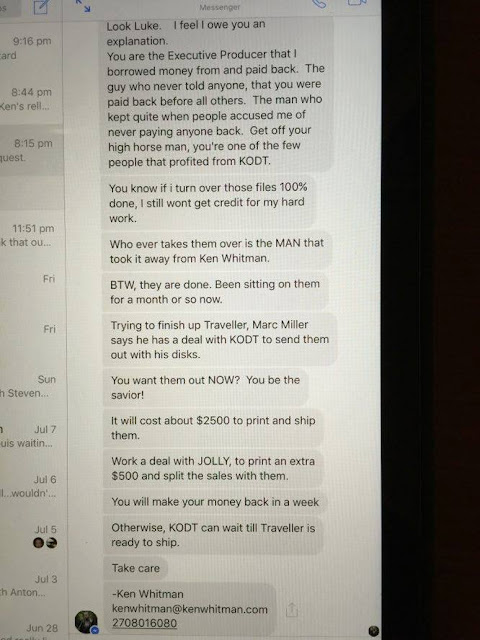 Ah Ken. You can't stop scamming, can you? I thought the hard drive crashed and all was lost. Then you needed someone to buy you a hard drive for $500. Now it's all done and has been for a month at least? You can't even keep your lies straight.

I may need to devote some time to do it for you. You know, collate your lies from the last 18 months or so. That way you'll be able to keep them straight. Oh, and of course they'd be posted, will links and citations, just so there would be no misunderstanding or accusations of anyone putting words in your mouth, as you do such a fine job of it on your own.
Posted by Tenkar at 10:09 AM