Ken Whitman has a Movie Listed on IMDb - Will "Girl Downtown" Stay Up or Go Down?

Now I know the above storyline was submitted "by the community" for Girl Downtown and not the world famous Ken Whitman, but it is a hoot. Ken actually is doing this "movie". Wait, no, Whit Whitman is doing it. 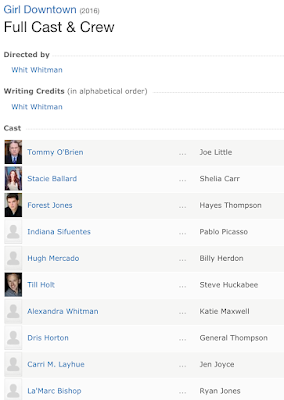 Want more of a hoot? I give you Kenny's IMDB:


Whit was born and raised in Fort Knox, Kentucky. He majored in Art Education and switched to Graphic Design at Murray State University in Murray Kentucky. He has had a lifelong passion for gaming, traveling and enjoying the arts (not to mention bilking customers and Kickstarter backers for YEARS). He works to produce many different forms of entertainment (and if you follow the Kenny drama, the lies, misstatements, threats and fraud, it has the entertainment value of a train wreck) and specializes in geek culture. Whit is well-known in the gaming and fantasy industry (infamous would be a better choice of words), having worked in the industry for over twenty years. Some of his most notable moments include working on products for the World Wrestling Federation, Ralph Bakshi's Wizards, The Three Stooges, Sergio Aragone's Groo, Drazonball Z, Dungeons and Dragons (notice not ONE of his failed to deliver Kickstarters made this list. I'd say any one of them are more notable moments)Whit looks forward to an exciting future in the entertainment business (bilking a new community out of their hard earned cash)
- IMDb Mini Biography By: Matt Smith (with comments by Erik Tenkar)