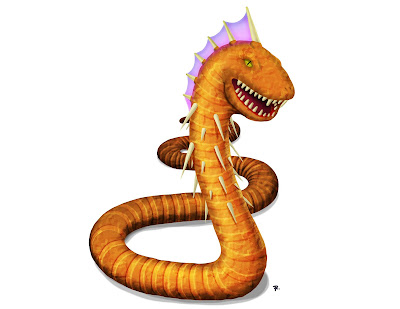 I'll be the first to admit that I don't play much in the world of supers. I love my superheroes but most of the adventures I've seen are more of the same old same old.Now, having just interviewed +Jeff Dee last night at NTRPG Con for Roll For Initiative and getting to flip through the latest printing of Villains & Vigilantes, I've got my eyes on the superhero RPG scene.

So, peeking at Kickstarter, there's Michael Satran's Journey to the Center of the Earth! for Champions (with conversions for Savage Worlds and Mutants & Masterminds). I'd come across it earlier but hadn't looked close enough until now. This is a supers adventure that isn't something that's been done time and time again.


Jules Verne. The Lost World of the Warlord. Doc Savage. The Challengers of the Unknown. The Fantastic Four! The Savage Land! As long as there have been stories about explorers and superbeings, there have been stories of strange underground lands and societies at Earth's Center. This campaign supplement for Champions by veteran game author Michael Satran fits easily into any campaign world - and in glorious full color! It addresses a variety of differing power levels, with many options for adjustment and expansion.

This softcover campaign supplement for Champions Complete using Hero System 6th Edition rules runs approximately 280 pages, including art and maps. All backers at the $20.00 or more level will also receive a zip file containing not only the PDF of the book, but additional PDFs character sheets and information for Savage Worlds and Mutants & Masterminds as well.

Meet the King of the Reptile Men, and find out why he wants to go to war with the surface world!

Face The Oligarch, guardian of the laws of magic, and learn his hidden agenda! To many on the surface world he is a sinister villain! To others, a bold leader!

Tons of ideas for your superhero game even if you don't play Champions, Savage Worlds, or Mutants & Masterminds!

Maps of the Center of the Earth, including a typical city, key areas of the Reptile Empire and the Oligarch's Dark Spire!

Learn secret objectives of the Cult of the Ebon Flame!

See how other criminal organizations and governments deal with the Center of the Earth!

Rules for how much knowledge the characters should have in different types of campaigns!

Over 30 new characters to bedevil, confront, and aid your heroes!

Hundreds of plot seeds, ideas, and ways to mix things up to make your game unique!

So yeah, this excites me. Enough that I got Michael to send me a piece of art that hasn't been shown yet for the Kickstarter.

Go figure. Me and supers RPGs. Who'da thunk it?