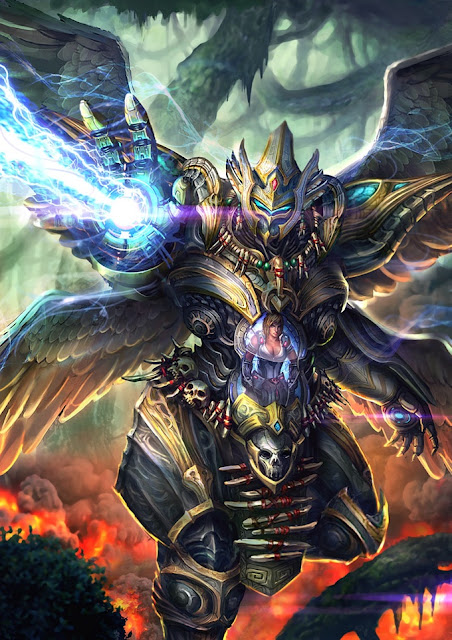 When it comes to RPG Kickstarters, +Kevin Crawford is the Gold Standard. On time if not early, art from the project placed into the public domain, excellent products one and all. Yep, Kevin is "The Man".

Godbound is Kevin's latest Kickstarter. It's funding goal was $8k. That was surpassed in less than a day.


Godbound is a tabletop role-playing game of newborn divinities awakening to unimaginable power. These men and women find themselves bound to the Words of Creation, the primal powers of a fallen cosmos where the Throne of God stands empty.
The world is shattered, its scattered realms racked by the aftershocks of the Last War and the final terrible struggle of the Made Gods who strove to replace the vanished Creator.

Some realms have been reduced to nothing more than blasted wastelands and silent bones, while others still endure in faded splendor and growing hardship. Their natural laws flicker, for the great engines of Heaven have begun to fail from lack of care. Their angelic guardians were long ago dispersed by the Made Gods and now nurse a bitter hatred of humanity's usurpation.

There are heroes still, and shining cities, and peaceful villages where a son may grow old in his father's trade, but these things darken with each new year's passage. The world winds down by slow inches. Into this twilight age have come the Godbound. Some say that it is the decaying husks of the Made Gods that give them their power, gobbets of divinity falling like rot to congeal about the souls of humankind. Others believe that it is the work of the Creator, reaching out from Their silence to touch Their creations with new light. Most do pretend to know why it is that a common peasant girl should ignite with the sun's own brilliance, or a grizzled old soldier should suddenly find half an army falling before his notched blade.

The Godbound bring hope and terror in equal measure. Even the freshly-awakened among them have incredible powers, able to hurl thunderbolts like lesser men throw stones, or spit curses that kill five generations of their enemy's kin. They are burnt to ashes, and rise anew. They are buried under hillsides, and shout the stones apart. They sing up gold from barren earth or pour out an autumn harvest from their saddlebags. They work miracles, and men tremble.

Yet they are men and women, with the dreams that men and women dream. Some are saviors, determined to lift their people from their hardships and lead them to a better day. Others are mercenaries, lending their aid to whatever lord or sorcerer-prince can pay them in suitable coin. And some, of course, are blind fools who wield their powers with the recklessness of children, building their dreams on the bones of the poor mortals around them. There are few who can gainsay a Godbound's will.

Even so, such terrible powers do exist. In the wilderness the wretched parasite gods swell on stolen celestial power, sucking the world's blood from its wounds. Grim eldritch adepts plumb nameless secrets and forge pacts with the monstrous Uncreated for power enough to tax even a divinity. Hulking Misbegotten shamble from the darkness and bring their numberless spawn behind them. These and other foes can force a Godbound to flee or perish if the newborn wielder of the Words hasn't the help of a faithful pantheon of allies.

The heroes of Godbound are hurled into a world unprepared for their coming. They will shake the pillars of fallen Heaven and scar the thrones of the kings of earth. Some will seek adventure, others the pleasures of rule, and a few no more than the small and homely things that fate would conspire to deny them. Yet what they will find, in the end, only you can say.