RPGNow Deal of the Day - The First Sentinel (Lesser Gnome) 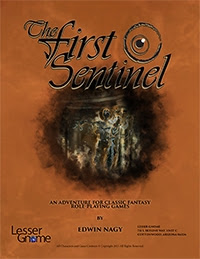 Today's RPGNow Deal of the Day is Lesser Gnome's stand alone adventure, The First Sentinel. Clocking in at 28 pages, it can be had for a mere $2.80 until 1059 AM tomorrow morning.

So, what do you get for your money?


Lesser Gnome is pleased to announce the digital release The First Sentinel by Edwin Nagy.

Within its pages Game Masters have a complete adventure for three to six players using character levels between three and five. Characters are confronted with a small mystery involving a missing resident. Clues could offer muted warnings or, if followed closely, will bring them face to face with a vanguard of the demonic Nexid.

This digital release has piece of written content from the 2014 printed edition with a few extras PDF extras. With a completely new layout that designed to make the PDF more than just a printout on your screen it is meant for table-top use on a tablet or other devices.

No watermarking
Separate text, art and vector layers.
Bookmarks to important tables and maps accessible via the PDF Reader
Hyperlinks to appendix entries and tables.
Interactive buttons for quick access to relevant pages
Image buttons that link to illustrations for players.

Email ThisBlogThis!Share to TwitterShare to FacebookShare to Pinterest
Labels: deal of the day, lesser gnome, OSR