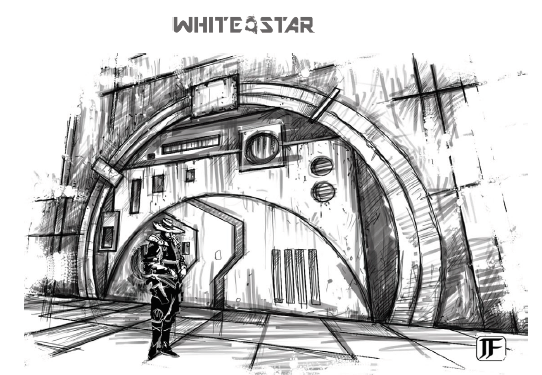 I was chatting with one of the regular Tavern readers last night and while talking about White Star the thought occurred to me - what I would like to see for White Star (and Swords & Wizardry and the like, but for today's post I'm going to focus on White Star) is a series of "Pocket Settings" - 4 pages meant to be printed out at 5 1/2" x 8 1/2" inches. Yep, a letter sized piece of paper folded in half and printed on both sides.

Scale could vary. For some, it might be a sector of space, a solar system, a space station, a planet, a city - whatever. Large enough to be it's own setting and sandbox.

First (front page) would be the map.

Second page would be a new class for White Star - because that makes the setting useful to folks that don't want to use the setting. Besides, new classes are cool.

Third page would describe the setting itself. Yep, you don't have much space for this so make it count.

Fourth page would be a series of adventure hooks.

My goal would be to give GMs enough to run with and be inspired by, but not so much it ties their hands. It should become THEIR setting and the setting of their players. It grows with them it ways I'd never have dreamed.

So, the question becomes - do I do this here on the blog? Do I publish it as a series of small PDFs at RPGNow? Even if I published it on RPGNow, bit and pieces would definitely appear at The Tavern - it just fits my style and method of writing.

Very much in the germination phase right now, so input would be appreciated ;)

You can blame James too at a discount if you want to. Just don't blame me, I'm just the messenger.
Posted by Tenkar at 11:09 AM