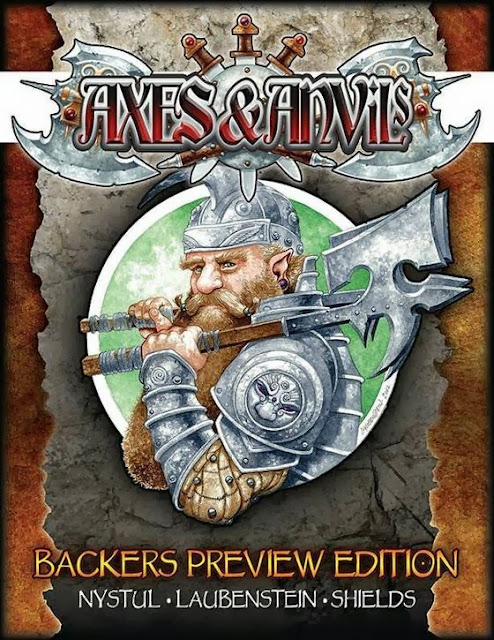 Maybe you are like me, holding out hope that at some point, Axes & Anvils will not just see a completed manuscript, but may also see print. I mean, the cover is pretty, but ain't worth squat without the words that go behind it.

Don't hold your breath on the print version, as Mike is not going to have a traditional place to call his home -

You know the Kickstarter success stories that go bad? The ones that succeed beyond initial dreams and that very success leads to unfulfilled Kickstarters and folks have lost their homes over such (or so it's been said). Mike went one better and lost (well, i think "left" is more accurate) his employment with the successful Kickstarters, and is now going nomadic, leaving his residence behind.

Without a place to live, there is no place to store physical rewards from the Kickstarter - not that I expected to see any at this point, as Mike no longer has steady employment and the Kickstarter funds have all been spent on non-Kickstarter expenses.

The upside is - Mike may very well be looking for a couch to crash on in your town (at least if you are in the Texas area I guess).

It looks like Mike is going through a soul searching stage in his life - hopefully he finds everyone's Kickstarter rewards during the search.
Posted by Tenkar at 8:57 AM