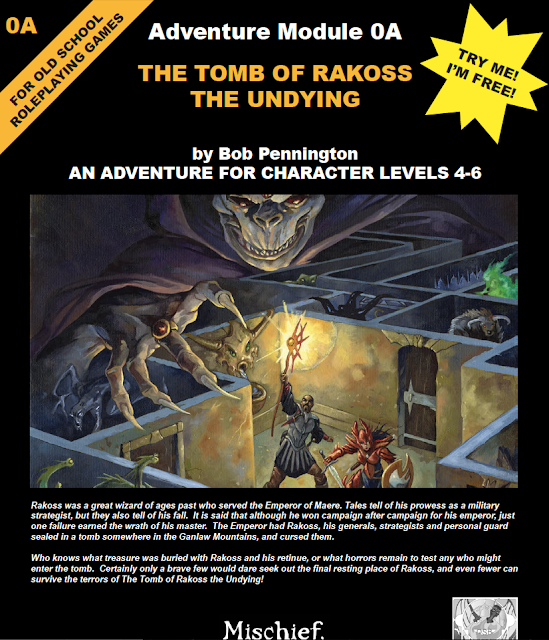 Yep, a new PWYW release for the OSR - The Tomb of Rakoss the Undying (for levels 4-6). Actually, the publisher, Mischief Inc say they want you to grab it for free, but they will gladly take a donation.

It's interesting to note that PWYW releases hit the New Release Page on RPGNow while free releases don't. Kind of makes sense to release as PWYW in that case.

Rakoss was a great wizard of ages past who served the Emperor of Maere. Tales tell of his prowess as a military strategist, but they also tell of his fall. It is said that although he won campaign after campaign for his emperor, just one failure earned the wrath of his master. The Emperor had Rakoss, his generals, strategists and personal guard sealed in a tomb somewhere in the Ganlaw Mountains, and cursed them.

Who knows what treasure was buried with Rakoss and his retinue, or what horrors remain to test any who might enter the tomb. Certainly only a brave few would dare seek out the final resting place of Rakoss, and even fewer can survive the terrors of The Tomb of Rakoss the Undying!

"The Tomb of Rakoss the Undying" is a challenging adventure for 3-6 characters of level 4 to 6.

Note: This product is intended to be FREE!  Please do not pay for it if you do not want to.

That said, if you wish to "donate" to our future development, you can pay any amount you want when you "purchase" this adventure. Those who pay for this adventure will be granted a "Founder" rank on our Mischief, Inc. member forums.
Posted by Tenkar at 8:21 PM