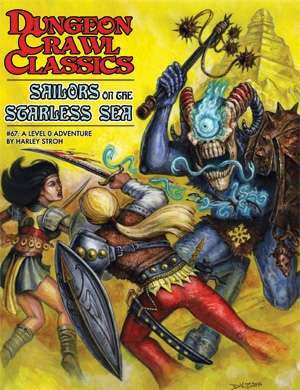 I find it hard to believe I never reviewed Sailors on the Starless Sea - as apparently I did in May of 2012 - oops! heh

That being said, in the time since I've actually run some DCC RPG funnels (and 1st level adventures), so I'm going to take another stab at this from the POV of having actually run this stuff:

Sailors on the Starless Sea is probably the perfect "0-level Funnel" if you are looking to set the tone of your DCC RPG campaign at the Goodman Games default. Each of the publishers of DCC RPG adventures have a certain tone to their products, which is to be expected. Slightly dark, sometimes apparently hopeless and the odds are never in your favor, that is the tone of the Goodman Games adventures. (actually, I should do a post on the tone of the different adventure lines and how to tweak them to work together).

With the mindset of  "You turn to your companions and ready your meager weapons. The time for retribution has come" you know your PCs are going to be in the thick of it. Not because they are heroes, but because it needs to be done.

The use of the Beastmen in Sailors on the Starless Sea is pure DCC RPG. Strange and unknown (and no two looking exactly alike) it keeps the party from falling into the old OSR / OGL / Pathfinder routine of "seen this, done it before" and gaming the encounter with metagame information that works across editions. "No, you haven't seen this before." Actually, you probably won't see it again, as each DCC adventure from all of the publishers pretty much have monsters / adversaries unique to each adventure.

It's also a fine example of making loot unique, whether magic or non-magical. Sure, the DCC rulebook discusses this, but this adventure shows it in action.

It's also fucking lethal, as all good funnels should be and also supplies PC replacement opportunities if needed (as all funnels should).

I'll make sure to let +Harley Stroh know how it goes when I do.

Since time immemorial you and your people have toiled in the shadow of the cyclopean ruins. Of mysterious origins and the source of many a superstition, they have always been considered a secret best left unknown by the folk of your hamlet.

But now something stirs beneath the crumbling blocks. Beastmen howl in the night and your fellow villagers are snatched from their beds. With no heroes to defend you, who will rise to stand against the encircling darkness? The secrets of Chaos are yours to unearth, but at what cost to sanity or soul?

An introductory adventure for the Dungeon Crawl Classics Roleplaying Game, Sailors on the Starless Sea pits a mob of 0-level adventurers against the legacy of the Chaos Lords and their corrupted hordes. Delving beneath the crumbling ruins, the characters discover ancient crypts, a starless sea, and an ancient ziggurat, where death and treasure await in equal measure!