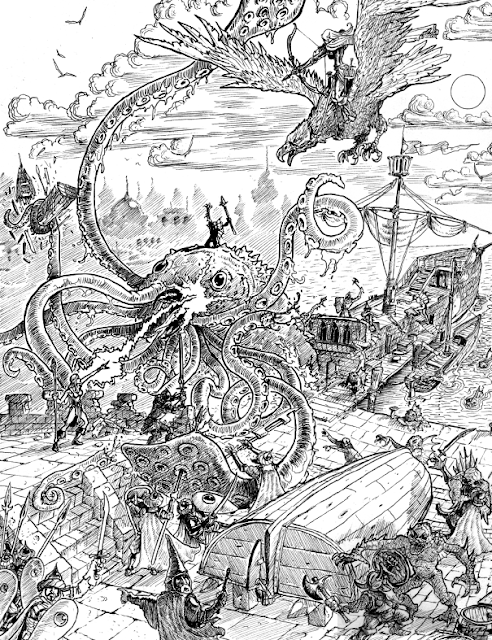 I've been listening to podcasts on my drive to and from work for months now. Gaming podcasts up the wazoo. Woot! My most recent addition had been Spellburn, an excellent DCC RPG flavored podcast. The last episode focused on wizards and spell casting, so I thought I would take a look at it too - and raise some questions.

See, for me, spell casting in DCC was the hardest part for me to wrap my head around. It's similar enough to the source material to seem familiar, but different enough to confuse the shit outa me when I first encountered it.

The whole "can cast a spell until you fail to successfully cast it" was another head scratcher when I first came upon the DCC rules. I wanted to see my spells by level chart. I've gotten past that handicap now, thank you much ;)

Wizards start out with 4 1st level spells plus their Int modifier. The starting spells are chosen randomly, but if the assortment is lame, the Wizard can drop half of those and choose that half (page 124 - easy to overlook as it is not next to the class description).

Wizards also gain 1 spell per level gained after 1st level - which would mean that as written, the characters will gain on average 2 spells of each of the higher spell level.

Is it possible to forget a spell and replace the knowledge of that spell with a different spell of the same or higher spell level that the caster can cast? As PCs find new spells via adventuring, they may want to replace some of their more useless spells with new shinnies. (spells like Patron Bond are pretty much single use, and I suspect would be readily forgotten after use by most wizards for something more useful in a game session).

If not, I can see that x/day type magic items that replicate certain spells would be very useful to fill in these gaps for the casters.