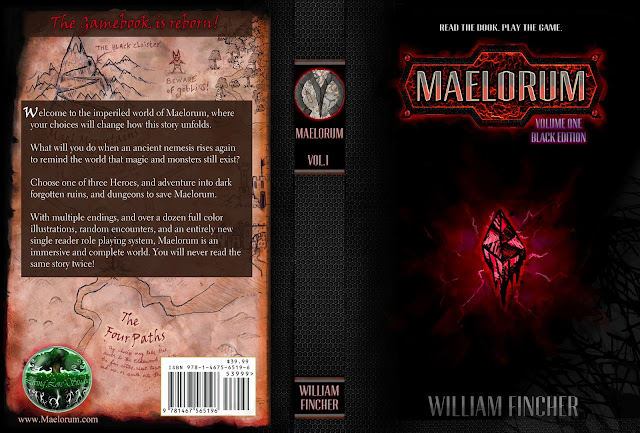 Truth in advance - I'm not kicking into the Maelorum: Reprint an Epic Gamebook! , but that's because I grabbed two copies the first time around ;)

Yes, it stands up to the hype. This is one of those rare solo "Gamebooks" that works on both the gaming level and the story level. This sucker is in my bag every time I take a trip to the Poconos to get away from the city (I like to squeeze in a few moments of solo gaming in between all of the running around the family finds for me). Have I finished it? Nope. I'm enjoying it in snippets. Still, my signed 1st edition is taking a bit of a beating.

Will has softcovers and hardcovers this time around, and I must say I really like the new art for the hardcover. Hardcovers can stand up to the workout you will probably put this through.

I like the "Volume One" on the cover, as it means Will has more stories planned. I may need to corner him one day and find out just what those plans are :)

There's about a day and a half left in the latest Maelorum Kickstarter. It's blowing past stretch goals and has already surpassed 500% of it's goal.

I know it will ship, as Will did a great job with the first Maelorum Kickstarter. I know the product rocks, as I have it.

If you missed out on Maelorum the first time around, now's your chance to correct that.

Damn, it feels good to be talking about a Kickstarter and feeling all good and positive. I'm sure that will fade when I look at all the projects I supported that are overdue by months and years. I'm pretty confident that Maelorum: Reprint an Epic Gamebook! will hit it's mark.