A Second Look at Maelorum, an Epic Gamebook Kickstarter 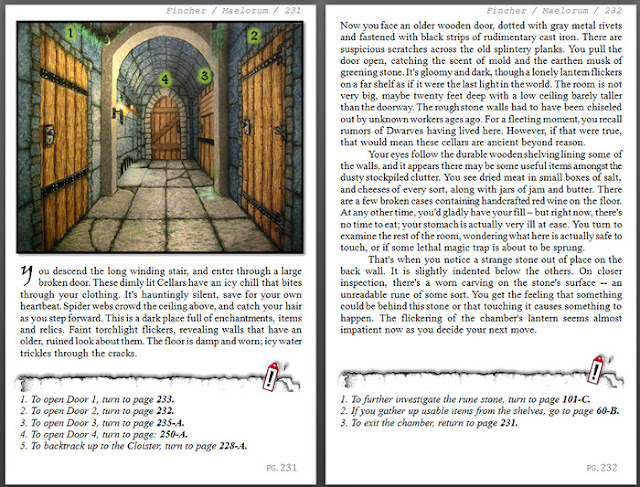 Do I think it will in and of itself, lead to a game book revival here in the States and elsewhere? Probably not, but it's success as a Kickstarter should lead to another Kickstarter following in its footsteps. Success breeds success.

See, I'm ready to help those "Shit! I should have supported it!" types ;)

I want to help keep our beloved Gamebook Genre alive, but I cannot do it alone, I need your help. When published, Maelorum will start a new independant series that will add a fresh title that I hope people of all ages will enjoy. I will try to show a new generation that didn't grow up with these books just what they have been missing!

This is a story you can interact with and change. Interactive Novels were most popular in the 80's with many series where the reader could determine the outcome of the story, and they have made a small rebound lately. Maelorum is the name of this nearly completed work, and is the result of over ten years of conception, planning, and countless dedicated, sleepless nights. It is different than any Gamebook that has come before, with a first-person navigation system as pictured above, a unique, rebooted battle system, and focuses on storytelling, full of character development, treasure to be found, monsters to be slain -- and much, much more!

Why this book needs a kickstart: Like many innovators on Kickstart, I have taken this project as far as I can, with the resources I have. Until now this has been a one man show, but now I need help completing Maelorum. I need your help giving it the polish that it deserves. Most of the writing is done. All but one illustration is complete. What I need is professional editing services and game testing, funds for printing costs and conversion into a digital, interactive version. That's right -- this is going to be available in print and as an ebook. 100% of the funding is going towards the project. You're not just backing a project, but supporting a cherished Genre by adding a new series.