Quick Peek at Astonishing Swordsmen and Sorcerers of Hyperborea 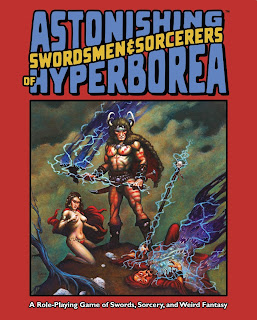 I figured I need to cleanse myself by looking at a legit, newly released, OSR game. Doesn't hurt that I got the PDF of Astonishing Swordsmen & Sorcerers of Hyperborea last night by being a supporter of the project when it was running on Kickstarter (I'll be waiting for the boxed set).

What can I say after my quick perusal of the Player's Book but "wow". Sure, we get the 4 core classes, the standard fare. We also get a fairly large selection of human races to choose from (as this is a game where demi-humans need not apply.

But then we get the sub classes. Damn but there's some classes I'd love to play.

THIEF SUBCLASSES
Assassin: a thief who specializes in murder and intrigue
Bard (Skald): a warrior, scholar, and weaver of enchanted lyrics and/or music
Legerdemainist: an adept thief who also commands the power of sorcery
Scout: a lightly armed explorer, intelligence gatherer, and stealth master

I think some of these will be making their way as NPC classes in my ACKS game ;)

Heck, I've barely scratched the surface of the Player's Book's 256 pages, and the Referee's Book is about as long. Good reading for the weekend :)

Email ThisBlogThis!Share to TwitterShare to FacebookShare to Pinterest
Labels: ASSH