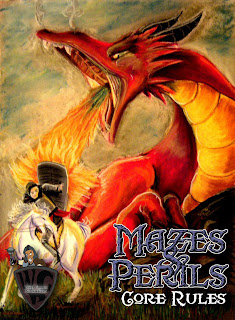 Does everyone remember the first incarnation of the Mazes & Perils fiasco?  Well, it's back.
Were there changes made? Yep.

Does it really have anything to do with the Holmes set of D&D rules? Not that I can see, or at least no more than other OSR rulesets. To claim such a heritage is inaccurate to say the least. Misleading might be more accurate.

Do we really need another clone?  No.  But this really isn't a clone so much as someone's house rules that previously cribbed a heck of a lot directly from the Holmes Boxed Set.

I was going to do a side by side comparison of the two "editions" (earlier "pulled" edition and current "fixed" edition) but really, why bother?

If you grabbed it the first time around, the major changes are:

other tables that went high to low now go low to high, or visa versa, or mixed order

Listen, if you want a set of really good OD&D style house rules, pick up a free copy of the LOTFP Weird Fantasy RPG. Sure, Mazes & Perils is free too. But your time has value, so why waste it?