RuneQuest 6 - Review - Part the Third - What Did I Do Before Questing For a Living? 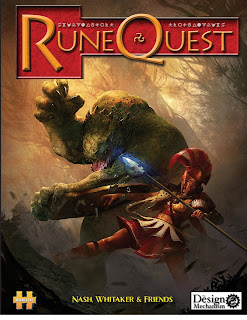 Chapter 3 of the RuneQuest 6 Rulebook is titled Careers and Development. If you followed the first 2 Chapters that I reviewed, you'd be safe in guessing we are still dealing with character generation. If RuneQuest 6 has something to hand it's coat on it's character generation. It's full and deep. Random tet it gives the player control on direction. This has been something that has separated RQ from D&D and it's offspring since RQ first hit the scene. RQ Heroes are not as disposable as their D&D brethren.
In Chapter 3 we are offered a list of careers, which is broken down by Cultural Background. As an example, Fisher appears on the list for all four civilizations, while Sorcerer just appears on the Civilized list. If the player could make a valid argument, it's possible to have a career that isn't standard to the Cultural Background, but that is the exception that proves the rule.
Here's the Civilized list of Careers:
Agent
Alchemist
Beast Handler
Courtesan
Courtier
Crafter
Entertainer
Farmer
Fisher
Herder
Hunter
Merchant
Miner
Mystic
Official
Physician
Priest
Sailor
Scholar
Scout
Shaman
Smith
Sorcerer
Thief
Warrior
The Careers come with a list of alternative labels - So the "Agent" could also be known as an Agitator, an Assassin, A Detective, And Informer, A spy or something else that you feel you can effectively hang your hat on.
You can select up to 3 skills from among the Professional Skills listed with that career in addition to getting access to all of the Standard Skills listed with that career. Wanna guess how many skill points your get to distribute? Yep, you're correct - 100 points. Again, as usual, no skill can be assigned more that 15 points during this stage.
As you get 7 standard skills can can pick up to 3 (out of a list of 7) you'll have 10 skills in which to drop those 100 points. As 10 points each would be the average, a cap of 15 points in any individual  means your probably will stay around that 15 pt average with some tweaks.
Later in the chapter we get to determine age. Age Categories are important, as they decide how many bonus points the character gets, the maximum skill increase (from the bonus points awarded due to age category), background event rolls and if the character is suffer from the results of aging. I wouldn't worry about the aging part - I don't see it affecting most starting PCs unless the player is looking to roll with someone past his prime. Most characters will start in the Adult or Middle Aged categories.
These bonus points can be applied to any skills a character has previously learned as part of the Culture or Career. So when the text says "Choose up to 3 skills" choose 3, even if you just dump a single point in the stray one or two. This is the stage to boost those skills (and others) up.
Next up is starting equipment. there is a chart for reference as to what characters of a certain social standing can expect to own. It's more a guide than anything, but useful none the less.
The chapter aslo touches briefly upon magic and cult membership, but apparently these are discussed in detail later in the rules.
I may need to take a break from the review to generate my own PC, as things tend to fall in the place in practice more so than just reading.
Posted by Tenkar at 5:45 PM