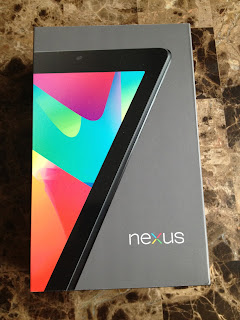 I thought it would end up with the Kindle Fire being left with nothing but sparks when compared to the Google Nexus 7. Sure enough, that's pretty much the results.

The Kindle Fire is admittedly older and uses an older, rewritten (read "crippled") version of the Android OS. Which is fine if you are giving the Fire to a non-tech savy person, as they will probably not know the difference with their use of the Fire.

The thing is, the Fire is heavier than the Nexus 7 - noticeably heavier and thicker. So for reading in bed, the Nexus 7 wins out.

Reading PDFs on the tablets? The Nexus 7 is smoother while scrolling through the pages and seems to load them quicker, especially on the larger PDFs we gamers know and love.

Gaming on it? Only game I've tried on both is Angry Birds Space. It looks sharper on the Nexus 7.

Movies is where the Fire may actually overtake the Nexus 7, and not because of picture quality, which should be sharper on the Nexus. The Kindle Fire allows you to access your Amazon Prime free videos collection. If that is going to be one of your main uses for your tablet, the Fire does something that the Nexus 7 does not.

Ease of use? The Kindle Fire doesn't have buttons for volume control, it's all on screen. I much prefer physical buttons for such, so point to the Nexus 7 for providing such.

Bluetooth? The fire lacks bluetooth. The Nexus 7 synched promptly with the bluetooth keyboard I got with my HP TouchPad (back when HP killed the TP and released it at rockbottom prices). If you ever want to use your tablet for extensive emailing or blogging, you need a keyboard. The onscreen keyboard is not sufficient.

Except for accessing the Amazon Prime Video Library, the Nexus 7 beats the Kindle Fire hands down. The Nexus is much more bang for your buck, and I'm enjoying reading the RuneQuest 6 rulebook on it in bed ;)