You Can Learn About Life When You Play the Game of Thrones... 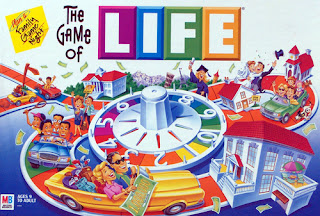 Do you remember The Game of Life? Driving around the game board with a car full of peg people, trying to get to the end before anyone else? I think I played the 1978 version, as it still had convertibles.

What did I learn about life Playing the Game of Life? Jack shit. I mean, I thought I was learning something, but I wasn't.  It was entertaining as hell when you're 12 years old and haven't yet found out about D&D and the like.

The Game of Thrones (HBO TV Series - I've yet to read the books), however, is a whole 'nother kettle of fish.

You learn life takes unexpected turns, that life hurts, love hurts, that family is sometimes just pawns in a larger game. Loyalty comes at a price and even then is not guaranteed. The Game of Thrones is very much like life. Not mine, certainly. Probably not yours. It is, however, real enough though to have real life visions reflected in it.

Does that make for a good RPG? I don't know about that, and that is another beast of a book that I'll have to take up the challenge to review after RQ6. My wife expressed interest in the GoT RPG, but I think that is solely because she's enjoying the TV series. Ah hell, who am I kidding? I know that's the only reason, but it will be nice to get a non-gamer's view on the RPG. I'll see if we can pull it off...
Posted by Tenkar at 10:10 PM

Email ThisBlogThis!Share to TwitterShare to FacebookShare to Pinterest
Labels: game of thrones