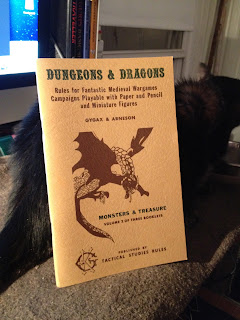 Book 2 of the 3 volume set of the D&D "White Box is titled Monsters & Treasure.  Within we will see what we can kill, and the kinds of loot we may find when we kill things.  Huzzah!

One thing I never realized until today, even though it has literally stared me in the face since I started reading the little 3 booklets, is the subheading under "Dungeons & Dragons" on each of the cover pages:

See, the first RPG didn't even know it was a role playing game.  It was a war-game, just played on a different scale than most.  Never doubt the war-game roots of RPGs, as they are deep and strong.

We are given our monsters as a list which is vaguely grouped by type.  The list takes up two pages, and goes from left to right with the following headers:

Monster descriptions are generally two to three sentences long, although some (like dragons) are major exceptions.  More than a handful refer the reader to Chainmail for further info.

I like the description of the Gray Ooze, it part because it makes little sense:

A seeping horror which closely resembles wet stone and is thus difficult to detect. (if it is in an area with wet stone.  put it on a wooden floor and it becomes obvious) It will not be spread by non-harmful weaponry (what the hell does this mean?  is it spread like butter otherwise?  what the f' is "non-harmful weaponry"?), but it is subject only to lightning bolts or cuts and chops by weaponry, for it is impervious to cold or fire.  It does not harm wood or stone, but it corrodes metal at the same rate that Black Pudding does (so those weapons you used to kill it?  gone...).  It does two dice damage to exposed flesh for every turn it is in contact with it.  This sucker kicks ass and takes name.  Evil, evil little beast.

Treasure Types Table - these never made sense to me in any version of the game and I don't recall published adventures ever appearing to follow these tables.  I will admit to using the ones in AD&D back in my teen years, but than I was also putting mature dragons in 10' square rooms and allowing the party to fully engage.  Still, if I was going to pick my favorite treasure type, I'd choose "H".  Best chance of hitting Megamillions (alright, 10's of thousands of GPs)

(i'll pick up with the magic treasures in the next part)
Posted by Tenkar at 9:15 PM