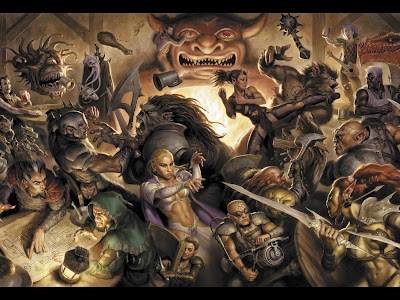 In Spinal Tap, the amp in question went to eleven.  From what little we've seen discussed about D&D Next, the new edition doesn't look to be amping up the character power like 4e did, but instead it seems to be ratcheting it back.

They want the basic monsters to be effective over a larger swath of levels.  Not by, apparently, giving us mooks, elites, bosses and such, but by actually having the base monster be an effective threat over multiple levels.

The only way you can accomplish this is by doing away with, or greatly slowing down, the THAC0 (to-hit) increases that the classes get.  Gone are the days of +1 per level to all the classes like you see in 4e.  I suspect that the +1  per level that fighters have gotten since AD&D is gone too.

The neutering of Save or Die mechanics.

The depowering of "Turn Undead".

The idea of set skill targets for skill challenges.  If the PC has a skill score that meets or beats the skill target, it's an automatic success.  No roll needed.  (this isn't empowering, it is disempowering - because the moment the skill target is out of reach, your chance of success is nearly nil).

The thing is, if they can keep characters leveling slower, or leveling at a somewhat normal speed with a slower increase to their actual power levels, no longer will modules be written for levels 1 - 3 but 1-6 or 1-8.  It's going to be a wide band, but I suspect those bands will have cut off points where the power level "jumps" to the next tier.

It almost seems as if someone on the design team spent some time reading up on E6, the game inside D&D.  They want to keep the game at it's initial sweet spot, then they will jump it to the next tier and keep it at that sweet spot, and so on.  Yes, I'm talking outa my ass... I know that.  That being said, I strongly suspect I am right on this.