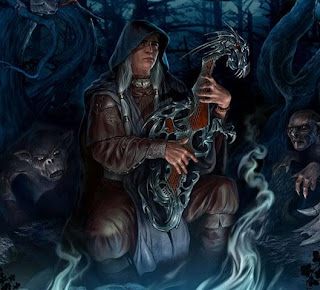 I had a conversation with a fellow blogger last night via Google chat about LotFP Weird Fantasy RPG rules.  There was some clarification that was needed for one of the rules, which wasn't as clearly stated as it should have been, but we both pretty much knew where Raggi was going.  Bad math (either on our side or Raggi's, it was after midnite and I wasn't rechecking math) might have also played an issue.  Still, the conversation got me thinking about Weird Fantasy again.  Which inevitably led to thinking about Bards.

There are no Bards in Weird Fantasy (no Paladins, Rangers or Druids either, but I digress).  I happen to like bards.  I even wrote one for Swords & Wizardry that made the last issue of KnockSpell.  So, if I'm going to tinker with Weird Fantasy Cannon, I may as well start with a class I really enjoy.

One of the huge strengths of Weird Fantasy is the Specialist class.  The "pip" system is really neat, and I think it could be used fairly well with a Jack-of-All-Trades sort of class, like the Bard.  We just have to define his "pip" powered abilities.

He's a bard, so Charm is a must.   Some type of Lore ability.  Spellcasting, but using the "pip" system, so it is far from powerful but possibly useful (i've got an idea for this), Pick Pockets (expanded to include all types of "sleight of hand" activities) - an Inspire type of ability would be fairly powerful in the Weird Fantasy rules, as only Fighters advance in combat ability.  Or maybe not so powerful, as most classes should be avoiding toe to toe combat in any place.

Let me know what you think, I'm open for input.  It's in the brainstorming stage at the moment...
Posted by Tenkar at 10:18 AM