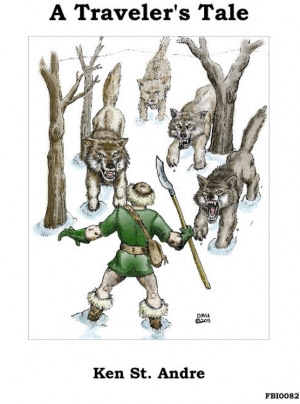 Flying Buffalo Inc is slowly but surely adding to it's available collection of Tunnels & Trolls Solos, which is a damn good thing.  Much of the play that T&T gets its with solo adventures, and a limited well to dip into means limited gameplay in the end.  Besides, adding a new release every month or so keeps people like me actively talking about Tunnels & Trolls, so it's a win / win for everyone.  That being said, I wouldn't mind seeing a good introductory standard (read non-solo, but party and GM) adventure being released in the future.

A Traveler's Tale was originally written by Ken St. Andre for White Dwarf magazine back in the early 80's under a different title, but has been updated for the new 7.5 rules released by Fiery Dragon.

So, what do you get for your $2.99?  About 40 pages worth of solo adventure written for a character within the level range of 1-3.  It's been my experience if an adventure says "for characters with less then 100 combat adds" like this one does, you want to come fairly close to that number without going over.  It certainly helps with survivability.

Would you rather fight dire wolves in a blizzard or spend the evening drinking with a one-eyed dwarf in a cozy tavern? That's a no-brainer, right? You might want to reconsider, because you'll actually be safer with the wolves. This is a solitaire adventure intended for 1st to 3rd level characters with fewer than 100 adds, using the Tunnels & Trolls 7.5 rules.