Mini Review - B1 Journey to Hell (for OSRIC) 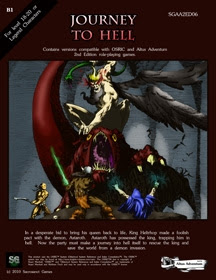 So, as to keep a balance in PDF cost in the items I post about, I present B1 - Journey to Hell from Sacrosanct Games.  For a mere 4 quarters, 20 nickels (none wooden), 1 measly dollar, you get about a dozen and a half pages of adventure for your party that has reached legendary status in OSRIC (or any of the OSR family of RPGs).

As an aside, about 25 years ago I put my party on an adventure thru Hell - fudged stats, levels 16-22, DM PC, vorpal blades (the beheaded Asmodeus)- the best of Monty Hall from back in the day.  I've yet to run a PC of my own, or DM for a party in which any character made it past level 11 in the years since then.  So I'm not someone that can tell you if this new Journey to Hell is balanced or not for levels 18-20.  I certainly can't say how well it works for the Altus Adventum version that is also included in the package.

I can say that I've already found a section that I can steal and modify for use in another game, so I figure most should get their buck's worth, even if not used as written.


In a desperate bid to bring his queen back to life, King Heltrhop made a foolish pact with the demon, Astaroth. Astaroth has possessed the king, trapping him in hell. Now the party must make a journey into hell itself to rescue the king and save the world from a demon invasion.

B1, Journey to Hell is an adventure for both the OSRIC (or other favorite old school version) and the Altus Adventum 2nd edition role-playing games.  Versions for both systems are included.  It is based off of Dante's Inferno, and takes the heroes into Hell itself in a bid to save the king.  This adventure is designed for characters level 18-20 (OSRIC version) or Legends (Altus version).

While not being directly linked to the A1-A4 series of  $1 adventures from Sacrosanct Games, there are a few references to those modules.  While none of those are required to play the game, having them would put a lot of things into better context if you had.
Posted by Tenkar at 8:55 PM