The Trollish Taproom - The Many Sizes of Tunnels & Trolls 5e 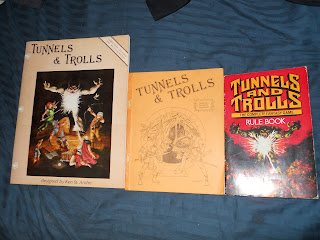 Tunnels & Trolls really hit it's stride with the release of the 5th edition rules.

On the left is a second printing (Jan '80) of the T&T rules.  Later printings (including 5.5e) blow up the cover art to encompass the whole cover.

The smaller book with the orange cover is a second printing (also Jan '80) of the Tunnels & Trolls 5th edition for the UK.  This edition is secured by two staples, the art is a line drawing on orange cardboardy paper (that dog ears nicely.  Other then that, it's pretty much a carbon copy of it's larger sibling the best I can tell.

The yet smaller book on the far right (with the nice flash glare - go me!) is the Corgi printing (1986) of the Tunnels & Trolls rules.  It's printed on mass paperback quality paper (which means poor).  It is however, probably the easiest size for normal reading habits.  Corgi publishing is the company that decided to excise many of the sillier T&T spell names, so if that is keeping you from jumping on the T&T train, you might want to track this down.  You could also pick up the T&T Double Solo's that Corgi put out - most are still available from Flying Buffalo Inc at very reasonable prices.  Each includes a shortened version of the T&T rules, but as the character advancement and spell lists allow for advancement to level 11, you have an additional added value.

I have UK versions of some of the earlier T&T Solos, which I may post to compare to their American siblings at a later time.
Posted by Tenkar at 7:24 PM

Email ThisBlogThis!Share to TwitterShare to FacebookShare to Pinterest
Labels: the trollish taproom, Tunnels and Trolls